Animals in Art and Thought: To the End of the Middle Ages [Hardback] 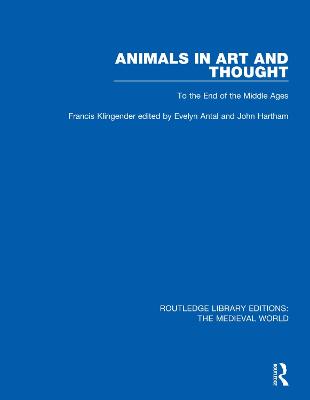 Originally published in 1971, Animals in Art and Thought discusses the ways in which animals have been used by man in art and literature. The book looks at how they have been used to symbolise religious, social and political beliefs, as well as their pragmatic use by hunters, sportsmen, and farmers. The book discusses these various attitudes in a survey which ranges from prehistoric cave art to the later Middle Ages. The book is especially concerned with uncovering the latent, as well as the manifest meanings of animal art, and presents a detailed examination of the literary and archaeological monuments of the periods covered in the book. The book discusses the themes of Creation myths of the pagan and Christian religion, the contribution of the animal art of the ancient contribution of the animal art of the ancient Orient to the development of the Romanesque and gothic styles in Europe, the use of beast fables in social or political satire, and the heroic associations of animals in medieval chivalry.