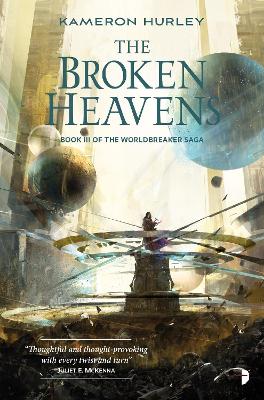 Palielināt
Citas grāmatas par šo tēmu:
Permanent link: https://www.kriso.lv/db/9780857665621.html
The Tai Mora - invaders from a parallel universe - have vanquished their counterparts and assumed control of the world called Raisa. The Saiduan are wiped out. The Dhai nation has broken apart. The remaining countries are in chaos.While the Dhai retreat and regroup, led by the recklessly headstrong Lilia, the Tai Mora begin to unravel the mystery of how to use the ancient Dhai holy places to harness the power of the stars and cement their tyrannical rule for another two thousand years. With more refugees from ravaged lands passing through the soft seams between worlds every day, time is running out for the Tai Mora and the last of the Dhai. Only one ruler, one nation, one world can survive. Who will be saved, and who will be sacrificed, when the heavens finally break? Back with a vengeance - and fearless, unapologetic writing - Hurley's visceral masterpiece finally reaches its world-shattering end...File Under: Fantasy [ Parallel Lives | Ruined Mothers | Zodiac War | Ultimate Sacrifice ]
Show moreShow less

"Epic in every sense of the word. Hurley has built a world - no, worlds - in which cosmology and magic, history and religion, politics and prejudice all play crucial roles. Forget all about tentative, conventional fantasy; there's so much great material in here that Hurley needs more than one universe in order to fit it all in." "The Mirror Empire is the most original fantasy I've read in a long time, set in a world full of new ideas, expanding the horizons of the genre. A complex and intricate book full of elegant ideas and finely-drawn characters." STARRED REVIEW: "Hurley reuses old tropes to excellent effect, interweaving them with original elements to create a world that will fascinate and delight her established fans and appeal to newcomers. Readers will blaze through this opening instalment and eagerly await the promised sequel."

The bloodsoaked conclusion to Kameron Hurley's epic fantasy masterpiece - the Worldbreaker Saga - is unleashed.
KAMERON HURLEY is an award-winning author, advertising copywriter and online scribe. She has won the Hugo Award, Kitschy Award, and Sydney J Bounds Award for Best Newcomer; she has also been a finalist for the Arthur C Clarke Award, Nebula Award, Locus Award, BFS Award, the David Gemmell Morningstar Award, and the BSFA Award for Best Novel. Her non-fiction has been featured in The Atlantic, Locus, and the game-changing collection The Geek Feminist Revolution.
Show moreShow less
Ienākt Jauns profils