Foreign Diplomacy in China, 1894-1900: A Study in Political and Economic Relations with China [Mīkstie vāki] 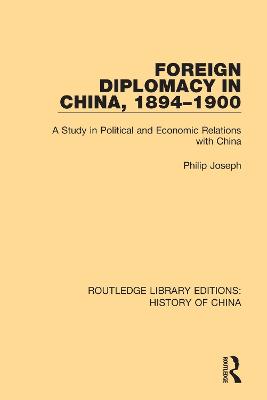 Palielināt
Citas grāmatas par šo tēmu:
Permanent link: https://www.kriso.lv/db/9781138614758.html
Keywords:
This book, first published in 1928, examines the first diplomatic contacts between China and the West. China had not always been isolated from the Western world, as travellers had visited China in the Middle Ages, but it was not until the end of the eighteenth century that efforts were first made to establish regular relations with China. This book traces the development of diplomatic relations from the Treaty of Nanking in 1842 to the start of the twentieth century.
Show moreShow less
1. Early Treaties with Foreign Powers
2. Commercial Privileges of the Foreigner
3. The Sino-Japanese War
4. The Peace Negotiations
5. The Intervention of the East Asiatic Dreibund
6. The First Indemnity Loan: A Cleft in the Dreibund
7. The Russo-French Programme
8. Russo-French Cooperation in Korea and China
9. The German Acquisition of Kiaochau
10. The Third Indemnity Loan: Negotiations for an Anglo-Russian Understanding
11. The Russian Acquisition of Port Arthur
12. British Policy After Port Arthur
13. Britain's Further Alliance Overtures
14. Britain's Efforts for Recognition of its Sphere
15. The Modified 'Open-Door' Policy
16. Mr Chamberlain's Bid for American Support
17. The Anglo-Russian Railway Sphere Arrangement
18. Triumph of the Modified 'Open-Door' Policy
19. Retrospect
Show moreShow less
Ienākt Jauns profils