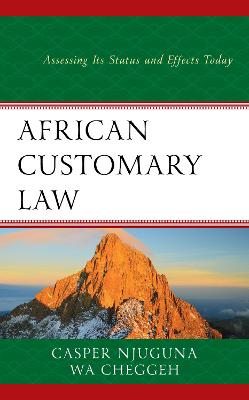 Palielināt
Citas grāmatas par šo tēmu:
Permanent link: https://www.kriso.lv/db/9781498584401.html
Keywords:
Africa is the emerging continent of the twenty-first century and will continue to play a major role in the world politics and trade. At the center of the African experience is customary law, which remains one of the most important and quintessential forms of legal, political, and social organization and regulation in the sub-Saharan landscape. Using qualitative and quantitative data, Casper Njuguna, sets a framework for understanding the hybrid nature of this law and creates an appropriate new moniker for it-Neo-Autogenous Sub-Saharan Law (NAS law). This systematic and empirical analysis addresses philosophical issues like human rights, property rights, women's rights, individual rights and freedoms, family relations, social structures, and political loyalties, which span beyond Africa and African scholars.
Show moreShow less

This book makes a major contribution in offering an original framework for understanding the hybrid nature of customary law in Sub-Saharan Africa. The seminal work stands out as the first rigorous, systematic empirical analysis of customary law's presence and its effects in the midst of a world society that increasingly adheres to the norm of written constitutions and ordinary law. -- Linda Camp Keith, retired clinical professor at the University of Texas at Dallas