Dreaming in a Nightmare: Finding a way forward in a world that's holding you back [Hardback] 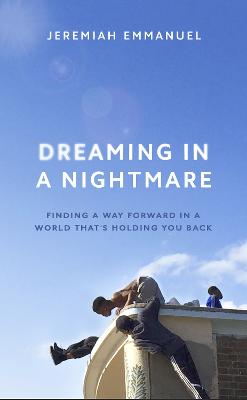 Permanent link: https://www.kriso.lv/db/9781529118612.html
Keywords:
A moving and powerful account of the problems faced and overcome by a new
generation, from an extraordinarily accomplished young activist and
entrepreneur.
_______________________________________
How do you find your way forwards in a world that&;s holding you back?
'My name is Jeremiah Emmanuel. I&;m twenty years old. I was born and raised in south
London, in an area affected by crime, poverty and a lack of opportunities. This was the
world that I knew growing up. It was a world where violence was accepted and prison was
expected. A world in which your best friend could vanish overnight. But as I got older, I
began to experience another world. This was a world where people listened to you, where
opinions were heard, where doors were opened, where opportunities were everywhere.
Dreaming in a Nightmare is the story of those two worlds, and how it is possible to move
from one to the other. It is both an urgent exploration of a growing national crisis, and a
guide to overcoming the obstacles young people should not have to face. It is my story
and the story of my generation. It&;s a book that I hope will change your world.
&#160;

A moving and powerful account of the problems faced by a new generation, from crime to poverty to an increasingly divided society, from an extraordinarily accomplished young activist and entrepreneur.

My name is Jeremiah Emmanuel. I&#x2019;m twenty years old. I&#x2019;m an activist, an entrepreneur, a former deputy young mayor of Lambeth and member of the UK Youth Parliament. I wanted to change the world, but the world I was born into changed me first.

Raised in south London, I lived in an area where crime and poverty were everywhere and opportunities to escape were rare. Violence was accepted, prison was expected. Your best friend might vanish overnight, never to be seen again. That was the world I knew; the only one I thought was possible for people like me.

But somehow, as I got older, I found my way to a different world: a place where people listened to you, where opinions were heard, where doors were opened, where there were opportunities around every corner. Everything had stayed the same and everything had changed.

A moving and powerful account of the problems faced and overcome by a new generation, from an extraordinarily accomplished young activist and entrepreneur.
Jeremiah Emmanuel is a youth activist, public speaker and entrepreneur. He started working within his local community at the age of four, campaigning around several issues that affected young people with the Nelson Mandela School Foundation. In 2011 he was elected into the UK Youth Parliament becoming an MYP, and later became a young mayor within London. Aged fifteen, he founded the BBC Radio 1 and 1Xtra Youth council, and created a youth consultancy enterprise, EMNL, which has recently worked with organisations including Rolls-Royce, Nike and the Queens Commonwealth Trust. He is also a member of the Gates Foundation, a youth ambassador for the Big Change Charitable Trust, a Founding Member of the Conduit London. In 2017, he was awarded a British Empire Medal (BEM).
Show moreShow less
Ienākt Jauns profils