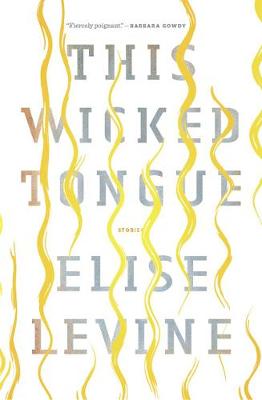 Palielināt
Citas grāmatas par šo tēmu:
Permanent link: https://www.kriso.lv/db/9781771962797.html
In moments of exile and self-exile, exodus and return, Elise Levine’s uncanny narratives lay bare the secret grammar of their characters’ psyches. An ill-tempered divinity-school candidate refuses to minister to a dying man’s wife; a couple fails to connect as they tour an ersatz cave in the south of France; holy women grieve in medieval England, and a pregnant runaway hitches a ride with a Church leader of dubious intentions. Propelled by their longing for pasts that no longer exist, these reluctant Adams and contemporary Eves confront the unspoken, the maligned, the abject aspects of their inner geographies, mining them for gems that glint and scatter in the light. Uncompromising and honest, lyrical and wry, This Wicked Tongue dares to tell the truth about the places we have come from and the new ones we might find.

Fast-paced, character-driven, fabulist narratives mine our shifting allegiances to identities shaped by belief, geography, and love.

PRAISE FOR THIS WICKED TONGUE "It's been a long wait for fans of Elise Levine's delicious short stories. But the wait was well worth it...[ This Wicked Tongue] delivers in spades. From the get-go, Levine demonstrates a boisterous command of language and an ability to seize the reader's attention...her stories pry us open, revealing our secretly wounded places, finally acting as balm and salvation. Lucky us." -Toronto Star "Sit back and let the language, distilled to its most pristine, wash over you with the force and effect of poetry." -Hamilton Review of Books "Expertly crafted, impressively original, inherently riveting...very highly recommended." -Midwest Book Review "Levine offers a vision and a language so poetically visceral and fiercely poignant-so uniquely intelligent-that story after story I was in awe of her courage and artistry." -Barbara Gowdy "Edgy...convey[ s] themes of yearning and loss...Levine demonstrates her ability as a wordsmith par excellence." -Winnipeg Free Press "Elise Levine writes with a new and exciting type of lyric rhythm. These are stories with the beating heart of poems." -Rion Amilcar Scott, winner of the 2017 PEN/Robert W. Bingham Prize for Debut Fiction "Each story in This Wicked Tongue is powerful and vivid and packed with an emotional punch to the heart." -Quill & Quire (starred review) "Elise Levine's startling sentences alternate between serrated sentiment and lyrical reverie, offering readers that rarest commodity-genuine surprise." -Jeff Jackson, author of Destroy All Monsters "Elise Levine uses language like a scalpel to cut to the nervy core of our inner life. There's a restless desolation in these stories, perfectly poised against a wily, wry wit. This Wicked Tongue is wicked smart." -Dawn Raffel, The Strange Case of Dr. Couney "Taut, musical sentences...a stylish, experimental collection." -Kirkus Reviews "Levine shines, furnishing a mental space with language that juggles colloquial and classical vocabulary, complete with verbs that feel freshly minted. In other hands, such an inward turn might give rise to feelings of claustrophobia, but here one has the sense of a widening." -Literary Review of Canada "Wonderfully dark, eerily atmospheric...sharp, smart, thoughtful, and rendered in Levine's customary powerhouse prose." -Open Book PRAISE FOR ELISE LEVINE "Reading Elise Levine is akin to a wild ride down a dark road at night...Bold and startling...Precipitous and exhilarating." -Globe and Mail "As immersive, hyper-vivid and true as fiction ever gets." -Lisa Moore "A dazzling wordsmith, a lexical tease, Levine is like a kid let loose in a leaf pile, kicking up words for the sheer joy of watching them spin." -Toronto Star "A cutting-edge literary sensation." -NOW Magazine "One of Canada's finest fiction writers...Levine demonstrates a kind of incandescent knowing about human affairs which she deploys in stunningly nuanced passages...A sensitive, cagey dominatrix of literary form and human psychology." -George Elliott Clarke, Mail Star "Audacious...There's hardly a word in [ these stories] that doesn't weigh heavily, or doesn't have a bristling edge to it." -Toronto Star "Levine's vivid language and unflinching exploration of people living on the edge of society will stay with you long after each story is read ... Levine is unafraid to experiment with language, voice, and form. Her explorations of humanity and the adventurous spirit of her work will keep the reader hooked, hesitating to turn the page but unable to resist the pull of her prose." -St. John's Evening Telegram "Levine's writing is adventurous and brave...Tautly constructed and rigorously controlled..." -Quill & Quire "Levine is, undeniably, an outstanding wordsmith. Her writing style moves in multiple directions, making high stakes out of small movements while turning panic into poetry." -Winnipeg Review "Taut and direct, Elise Levine's writing compresses the distance between art and audience, drawing a reader experientially through her fiction. Levine is a visceral imagist. Her fiction renders event indistinguishable from emotion, affecting the gut as fully as the mind." -Ottawa Citizen "Levine uses raw, hallucinatory prose to tell this curious story of a woman becoming undone...The novel's visceral wordplay, rough sexuality, and anguished depiction of survivor's guilt are bound to captivate its audience. A transgressive, gut-wrenching portrayal of grief that asks what it's like to drown." -Kirkus Reviews "Levine's spare language works brilliantly to capture both the vastness of the open water and the claustrophobic chaos of underwater caverns [ as well as] a heightened, stylized canvas for Marilyn's addictive nature...The result is a tale of self-destruction and hubris...absolutely gripping." -Numero Cinq "A vibrant mixture of intimate moments...Blue Field is an exploration of two selves coming together with the sea. Levine's aquatic language is gorgeous, displaying her literary prowess." -THIS Magazine "No reader can make his or her way through these stories and retain any kind of complacency." -Calgary Herald "Reading the novel is a sensation akin to drifting weightlessly beneath the surface of the text...dazzling, textured, tightly woven." -Music and Literature "Levine exposes the roughness and the crude pain of life. It's a rare writer who can write bluntly about the raw side of life while subtly leaving room for her readers to make their own, often disturbing connections." -Books in Canada