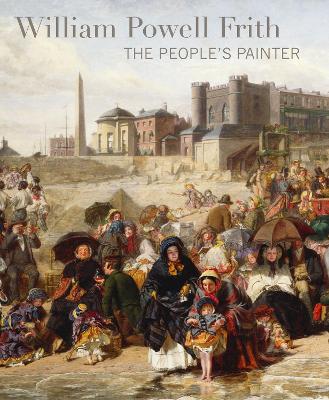 William Powell Frith (1819-1909), famous for his picture The Derby Day which normally hangs at Tate Britain, was the most celebrated painter of modern-life subjects in mid-Victorian England and the most popular British artist of that time. Published to mark the bicentenary of his birth and in association with an exhibition at the Mercer Art Gallery, Harrogate, this richly illustrated volume of essays offers fresh and fascinating perspectives on Frith's career and context.

Despite dramatic shifts in taste with regard to Victorian painting during subsequent generations, Frith's name has never been eclipsed, let alone forgotten – unlike those of most of his genre-painter contemporaries – as an introductory survey of critical responses to the artist's work reveals. This provides a starting point for investigations, drawing on much new and original material, of three of Frith's great panoramas of the Victorian world – Life at the Sea-Side (Ramsgate Sands), The Derby Day and The Private View at the Royal Academy, 1881. Further contributions explore important but hitherto neglected aspects of Frith's personal life and professional activity.

Of significant biographical interest are studies of Frith's close connections with Yorkshire (the county of his birth and also his first wife Isabelle's) and his friendships with contemporary writers, notably the Sensation novelist Mary Elizabeth Braddon. The artist's less well-known historical genre pictures are reappraised, with focus on the early success of An English Merry-Making, a Hundred Years Ago, while the key role played by the print trade in the widespread dissemination of Frith's images is examined in detail for the first time. An intriguing manifestation of Frith's popularisation was the re-creation of certain of his most famous compositions as tableaux on the London stage, yet another fresh topic in this presentation of 'The People's Painter'. Revisiting Frith and his achievement through new approaches, this book confirms his position as the pre-eminent visual chronicler of the mid-Victorian scene and the importance of his place in the history of British art.

The most celebrated visual chronicler of the mid-Victorian scene, this highly illustrated book provides fresh assessments of William Powell Frith's life and work
Richard Green FSA, formerly Curator of York Art Gallery, is an independent art historian, critic and consultant, with a special interest in British art from c.1750 to c.1900. He has written on artists ranging from Paul Sandby through William Etty to Albert Moore, and contributed many reviews of exhibitions and books to the Burlington Magazine. He is an Honorary Visiting Fellow in the Department of History of Art, University of York. Jane Sellars MBE is a freelance art historian, exhibition curator and specialist on the work of women artists. She was co-curator of the exhibition William Powell Frith: Painting the Victorian Age (2007), and curator of Atkinson Grimshaw: Painter of Moonlight (2011), and Art and Yorkshire: From Turner to Hockney (2014), held at the Mercer Art Gallery, Harrogate, where she was Curator of Cultural Services from 2003 to 2018.
Show moreShow less
Ienākt Jauns profils