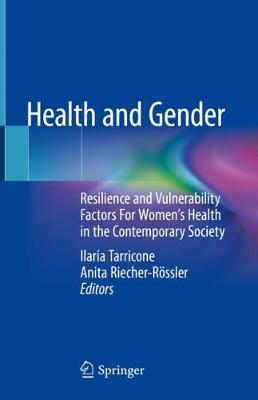 This book presents a concise and comprehensive overview of the most important protective and risk factors for women's health, and reviews the main areas of medical science from a gender perspective. Numerous scientific experiments and studies have shown how gender differences significantly affect the clinical presentation of physical and mental health disorders as well as responses to treatments. This text highlights these issues, while at the same time reflecting on the practical implications of the theoretical knowledge presented.

It also examines the organization of social and health services, which should increasingly take into account the specificities related to gender differences and where equality is based on truly embracing these differences. The final part provides insights into the experiences and testimonies collected by the authors of the book. Written by a multidisciplinary team of medical, psychosocial and humanities professionals, this book is of interest to health professionals and medical students.
Show moreShow less
Foreword.- Preface.- Fairness, Equality and Health: Toward a Gender Oriented Prospective.- The Woman in the History of Health.- Gender Violence: Risk Factors and Resilience.- Vulnerability Factors and Protective Factors for Mental Health: A Rereading in Gender Perspective.- Gender, Genoma and Health.- Women at Work.- Women, Migration and Social.- Environment.- Media.- Cinema.- Women and music.- Sport and Gender.- Diet and Gender.- Motherhood, Childbirth and Perinatal Age.- Childhood.- Adolescence.- Sexual health, LGBT and.- Human Right.- Senility.- Heart and Vascular Disorders.- Endocrine Disorders.- Urogenital and Reproductive Disorders.- Central and Peripheral Nervous Disorders.- Psychiatric.- Disorders.- Gender and Pain.- The Brain Gut Axis and the Gender.- Infectious diseases and gender.- Social Services.- Primary Care.- Towards Gender-Sensitive Mental Health Services.- Guarantee Committee for Equal Opportunity, Employee Well-being and Non-discrimination at Work (CUG).- Prevention of Violence and Emergency Services.- When the woman is the mother: the work of pediatrician for caring mothers and children.- ADU.- A Vase of Flowers.- Women at School.- When the daughter is a doctor.
Dr. Ilaria Tarricone is psychiatrist and assistant professor at the Department of Medical and Surgical Sciences of the Alma Mater Studiorum, Bologna University, and at the Department of Mental Health and Pathological Addiction - Bologna Local Health Authority. She trained at the University of Bologna, and gained a Master Degree in "Evidence Based Medicine and Health Research Methodology" and a PhD in "Human Psychobiology" at the University of Modena and Reggio Emilia. She is honorary researcher at the Psychosis Studies Department of the Institute of Psychiatry and Psychological Neurosciences - King's College London. She has been awarded Doctor of Philosophy in Psychiatry at the King's College London , 1st December 2015 (Thesis : Incidence, course and outcome of psychosis in first generation migrants in Bologna, Italy). She has been Coordinator of the Research Unit UNIBO for the FP7 Project European Gene-Environment Interaction (EUGEI). She is the scientific Coordinator of the Study and Research Centre "Bologna Transcultural Psychosomatic Team (BoTPT)" of the Bologna University. She is author of over 100 scientific publications. She is the Scientific Secretary of the European Psychiatric Association Section on Cultural Psychiatry and the Coordinator of the "Cultural Consultation Liaison Psychiatry - Special Interest Group" EAPM (European Psychosomatic Association). Anita Riecher-Roessler is a Professor of Psychiatry and Head of the Center for Gender Research and Early Detection at the Psychiatric University Clinics in Basel, Switzerland. She has specialised in psychiatry, psychotherapy and psychoanalysis, as well as in consultation and liaison psychiatry and in gerontopsychiatry. In 1998, she was the first woman to be appointed to a full chair for psychiatry in a German-speaking country. Her research interests include schizophrenic psychoses, gender differences in mental disorders, and mental disorders in women. In the field of schizophrenic psychoses she has mainly worked on the onset and early detection of these disorders but also on late onset schizophrenia. Her other main research focus is on the specific aspects of mental disorders in women, particularly on psychoneuroendocrine or psychosocial risk factors for mental health problems. This is reflected by works on mental disorders in the peripartum or during the menopausal transition on the one hand and by works on violence against women on the other. Her approach is a bio-psycho-social one, i.e. she always seeks to consider all these aspects in the pathogenesis as well as in the therapy of mental illness. She was a founding member/president of interdisciplinary societies for women's mental health, such as the International Association of Women's Mental Health (IAWMH) and the Interdisciplinary Society for Women's Mental Health and Gender Issues (gpgf) and chair of the Women's Mental Health Section of the European Psychiatric Association (EPA). She is Editor-in-Chief of the Archives of Women's Mental Health. In 2018 she was awarded the Constance Pascal-Helen Boyle Prize by the European Psychiatric Association for outstanding achievements by a woman in working to improve Mental Health Care in Europe. She edited 31 books, 99 book chapters and published over 340 original articles (h-index 61).
Show moreShow less
Ienākt Jauns profils