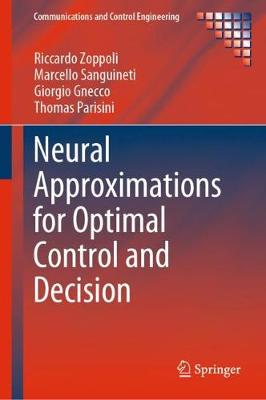 Neural Approximations for Optimal Control and Decision&nbsp;provides a comprehensive methodology for the approximate solution of functional optimization problems using neural networks and other nonlinear approximators where the use of traditional optimal control tools is prohibited by complicating factors like non-Gaussian noise, strong nonlinearities, large dimension of state and control vectors, etc.

Features of the text include:

• comparison of classical and neural-network based methods of approximate solution;

• bounds to the errors of approximate solutions;

• solution algorithms for optimal control and decision in deterministic or stochastic environments with perfect or imperfect state measurements over a finite or infinite time horizon and with one decision maker or several;

The authors’ diverse backgrounds in systems and control theory, approximation theory, machine learning, and operations research lend the book a range of expertise and subject matter appealing to academics and graduate students in any of those disciplines together with computer science and other areas of engineering.