Indirect Tax Reform in India: 1947 To GST and Beyond [Hardback] 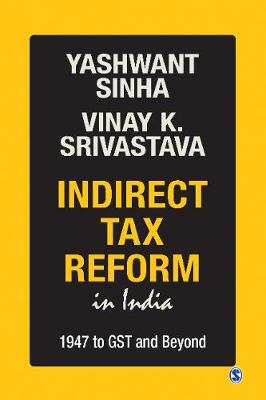 Palielināt
Citas grāmatas par šo tēmu:
Permanent link: https://www.kriso.lv/db/9789353289713.html
Keywords:
Indirect taxes have played an increasingly important role in the Indian economy. Indirect tax was first introduced in India in 1944 in the form of excise duty on Indian products as a measure of protection for goods imported from the UK. In the course of time, it became a well-established tax to shore up government finances. The need for reform in indirect taxes was felt soon after Independence, and several committees were appointed for this purpose. From there, the process of reforms of indirect taxes in India went through ups and downs till the introduction of the Goods and Services Tax (GST) in 2017. Indirect Tax Reform in India: 1947 to GST and Beyond maps these developments in detail and analyses the political economy behind it. It also deals with the current problems, the conceptual infirmities and the reforms needed urgently to restrict the disruption it has caused in the economy so far. This book outlines the impact of the past measures and the present changes, and suggests the future course of action for a better future.&nbsp;

The book will examines India's indirect tax structure and various reforms that have taken place since 1947 and makes valuable recommendations.
Show moreShow less
Preface Acknowledgements Introduction: Historical Background of indirect taxes in India Section A: Indirect Tax Reforms after Independence Tax Reform Committees over the Decades Modified Value Added Tax: 1986 to 2000 Central Value Added Tax: 2000 to 2017 Service Tax and Related Issues State VAT (State Value Added Tax): 2002 to 2017 Setting up of the Empowered Committee of State Finance Ministers and Its Role Section B: The New Regime of Goods and Services Tax Background of Goods and Services Tax The Constitution Amendment Bills The Constitution Amendment Act and Legislations Administration of GST The Structure of the New Tax System Evaluation of GST after Two and a Half Years GST Revenue, Settlement of IGST and Compensation to the States Return Filing in the GST Era Impact and Experience of the New Tax around the Country Policy Review and the Way Forward Appendix A: Indirect Tax Reforms in India: A Chronology Appendix B: The Constitution (Amendment) Bill of UPA Government and NDA Government Appendix C: Parliamentary Standing Committee Report on GST Appendix D: Select Committee Report on GST Appendix E: VAT, GST and Sales Tax Rates in the World Bibliography Index
Yashwant Sinha, Former Finance Minister and Minister of External Affairs of India. Vinay K. Srivastava, Associate Professor, Institute of Technology and Science, Ghaziabad.
Show moreShow less
Ienākt Jauns profils