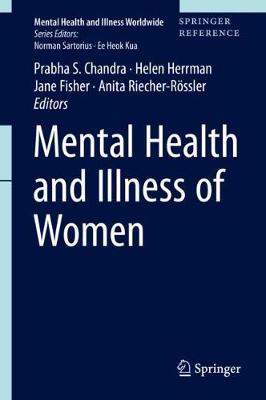 This book&nbsp;discusses psychiatric disorders among women&nbsp;in a manner that is relevant to clinical practice and&nbsp;keep&nbsp;cultural and social realities in perspective. The book is&nbsp;important in the face of rapidly changing conditions globally (including better education and more opportunities for work for&nbsp;women); challenges such as migration, war and violence and emerging areas such as&nbsp;newer reproductive technologies, Women's&nbsp;mental health&nbsp; cannot be divorced from social and cultural realities and while the book emphasises these areas, it&nbsp;also gives due importance to the current advances in neurobiology and psychopharmacology of psychiatric disorders among women. Chapters in the book are written by&nbsp;multiple authors, many of the chapters use&nbsp;the life stage approach,&nbsp;and have been written by authors&nbsp;from different parts of the world to ensure cultural relevance and diverse viewpoints.

Show moreShow less
Women as caregiver in elderly.- Refugees andd assylum seekers.- Suicide and suicidal behaviours.- challenges in women health care
Dr. Prabha S. Chandra is Professor of Psychiatry at the National Institute of Mental Health and Neurosciences (NIMHANS), Bengaluru, India. She is in charge of the perinatal psychiatry service which is the first of its kind in South Asia. She also heads the NIMHANS Centre for Well Being which is an urban community center for mental health focusing on youth and women. She is the President Elect of the International Association for Womens' Mental Health and an Executive Member of the International Marce Society for Perinatal Mental Health. Her research interests include perinatal and reproductive psychiatry, gender-based violence, training in gender-sensitive medicine, bioethics, psycho-oncology, and palliative care. Helen Herrman is Professor of Psychiatry at Orygen, National Centre of Excellence in Youth Mental Health, and the Centre for Youth Mental Health at the University of Melbourne, Australia. She is President of the World Psychiatric Association (WPA) 2017-2020 and Director of the World Health Organization (WHO) Collaborating Centre in Mental Health, Melbourne. She has received the award of Officer of the Order of Australia, and the honorary degree of Doctor of Medical Science from the University of Melbourne. She is a Practitioner Fellow of the Australian National Health and Medical Research Council and a Member of the Lancet Commission on Global Mental Health and Sustainable Development. She chairs a new Lancet-WPA Commission on depression. In the past, as Professor and Director of Psychiatry in St. Vincent's Health Melbourne, she led the development of an integrated area mental health service under Australia's national reform of mental health care. For one year she acted as regional adviser in mental health for the WHO's Western Pacific Region, based in Manila. Her research and practice interests include community mental health care and promoting mental health. She has past and present research programs in the mental health of marginalized groups, including homeless people, prisoners, and young women and men living in out-of-home care, and leadership of the WPA's action plan 2017-2020 concerned with supporting the contribution of psychiatrists to global mental health. Jane Fisher, an academic Clinical and Health Psychologist, is Finkel Professor of Global Public Health and Professor of Women's Health in the School of Public Health and Preventive Medicine at Monash University, Melbourne, Australia. She is Immediate Past President (2018-2020) of the International Marce Society for Perinatal Mental Health. Jane has long-standing interests in gender-based risks for women's reproductive health and mental health and of how these can be addressed in psychologically informed clinical practices and health promotion strategies. She has been Consultant Clinical Psychologist to Masada Private Hospital's Early Parenting Centre since 1996. She has been a technical adviser to the World Health Organization in the fields of maternal mental health and early childhood development since 2005. Anita Riecher-Roessler is Professor of Psychiatry at the University of Basel, Switzerland. She has specialized in psychiatry, psychotherapy, and psychoanalysis, as well as in consultation and liaison psychiatry and in gerontopsychiatry. In 1998, she was the first woman to be appointed to a Full Chair for psychiatry in a German-speaking country. Her research interests include schizophrenic psychoses, gender differences in mental disorders, and mental disorders in women. In the field of schizophrenic psychoses, she has mainly worked on the onset and early detection of these disorders but also on late-onset schizophrenia. In the field of women's mental health, she is particularly interested in psychoneuroendocrine and psychosocial risk factors such as violence against women and also in mental disorders during the peripartum or the menopausal transition. Her approach is a bio-psycho-social one, that is, she always seeks to consider all these aspects in the pathogenesis as well as in the therapy of mental illness. She was a Founding Member/President of interdisciplinary societies for women's mental health such as the International Association for Women's Mental Health (IAWMH) and the Interdisciplinary Society for Women's Mental Health and Gender Issues (GPGF) and Chair of the Women's Mental Health Section of the European Psychiatric Association (EPA). She is Editor-in-Chief of the Archives of Women Mental Health. In 2018 she was awarded the Constance Pascal-Helen Boyle Prize by the European Psychiatric Association for outstanding achievements by a woman in working to improve mental health care in Europe. She edited 32 books and 100 book chapters and published over 450 original articles (h-index 62).
Show moreShow less
Ienākt Jauns profils