Alexander Romance in Persia and the East [Hardback] 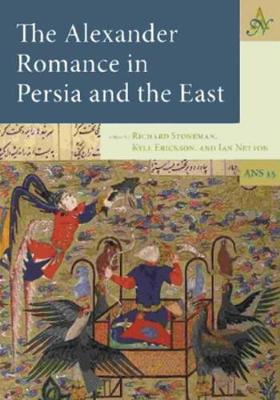 Palielināt
Citas grāmatas par šo tēmu:
Permanent link: https://www.kriso.lv/db/9789491431043.html
In the lands where his empire actually lay, Alexander the Great (356-323 BC) was remembered by some as a brutal destroyer and by others as a wise ruler and sage. Classicists, archaeologists, and other scholars explore how the Greek Alexander Romance, translated into various languages over the centuries, has influenced national and religious narratives in Persia and its surround. In sections on the formation of a tradition, perspectives, texts, themes, and images they discuss such topics as mapping the Alexander Romance, adventures of Alexander in Medieval Turkish, history and romance in al-Tabari's tales of Alexander, the kingship of Alexander the Great in the Jewish versions of the narrative, and Oriental imagery and Alexander's legend in art. The 23 papers are from a July 2010 conference in Exeter. Distributed in North America by The David Brown Book Co. Annotation ©2012 Book News, Inc., Portland, OR (booknews.com)

Alexander the Great of Macedon was no stranger to controversy in his own time. Conqueror of the Greek states, of Egypt and of the Persian Empire as well as many of the principalities of the Indus Valley, he nevertheless became revered as well as vilified.

Alexander the Great of Macedon was no stranger to controversy in his own time. Conqueror of the Greek states, of Egypt and of the Persian Empire as well as many of the principalities of the Indus Valley, he nevertheless became revered as well as vilified. Was he a simply a destroyer of the ancient civilizations and religions of these regions, or was he a hero of the Persian dynasties and of Islam? The conflicting views that were taken of him in the Middle East in his own time and the centuries that followed are still reflected in the tensions that exist between east and west today. The story of Alexander became the subject of legend in the medieval west, but was perhaps even more pervasive in the east. The Alexander Romance was translated into Syriac in the sixth century and may have become current in Persia as early as the third century AD. From these beginnings it reached into the Persian national epic, the Shahnameh, into Jewish traditions, and into the Quran and subsequent Arab romance. The papers in this volume all have the aim of deepening our understanding of this complex development. If we can understand better why Alexander is such an important figure in both east and west, we shall be a little closer to understanding what unites two often antipathetic worlds. This volume collects the papers delivered at the conference of the same title held at the University of Exeter from July 26-29 2010. More than half the papers were by invited speakers and were designed to provide a systematic view of the subject; the remainder were selected for their ability to carry research forward in an integrated way.
Show moreShow less

Show moreShow less
Richard Stoneman is Honorary Visiting Professor at the University of Exeter (UK) with particular research interest in the continuity of the Greek world and Greek tradition up to the present day and in Alexander the Great, especially in later legend.
Show moreShow less
Ienākt Jauns profils