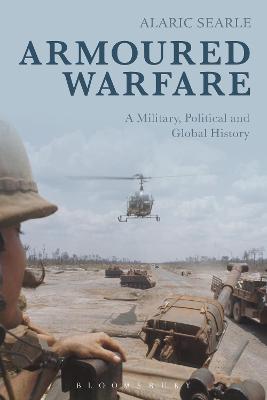 This book charts the history of armoured warfare from the first use of the tank in 1916 right through to the 21st century, adopting military, political and global perspectives. Alaric Searle explores the origins of the tank, its role in the First World War and its contribution to the outcome of the war. He considers its role as a tool of propaganda, the military controversies of the interwar period and the employment of armoured forces in all the major theatres in the Second World War.

Since the First World War, major and medium-sized powers have invested heavily in armoured forces. Searle looks at the conduct of mechanized warfare in Korea, Indo-China and Vietnam, and during conflicts such as the Arab-Israeli Wars and the Gulf Wars.Armoured Warfare adopts a global perspective, providing the most comprehensive survey of the history of the subject currently available. With a detailed bibliography of both primary and secondary sources, it is an ideal companion for those studying armoured warfare, modern military history and war studies.

[ Great] value to the novice and expert alike ... [ Would] be ideal as a text for any course relating to the history of innovation or modern combat. It is a solid foundational text on an expansive and complicated topic. * The Journal of Military History * [ An] excellent international history of armored warfare, utilizing both secondary and primary source material ... Searle provides a comprehensive introduction to the use of the tank in modern war and how its application has evolved over time. Summing Up: Highly recommended. General collections; upper-division undergraduates and above. * CHOICE * Armoured Warfare is a smashing success ... Even beyond its utility as a classroom text, [ it] has much to offer the scholar or the specialist ... A book like Armoured Warfare can serve as an indispensable reintroduction to the subject. -- Robert Citino * History: Reviews of New Books * Armoured Warfare is a worthwhile addition to any military library... It has a global perspective and provides a history of the tank, and it is an ideal companion for those studying armored warfare, modern military history, and war studies. * Military Review * The work of Alaric Searle is a useful introduction for both the historian and the practitioner. * Politique etrangere (Bloomsbury Translation) * In the scope of its investigation, both thematic and chronological, and in its well-documented bibliography, Armoured Warfare ultimately provides a good learning base for the student or researcher who wishes to learn about the history of mechanized war in a broad sense. * Strategique (Bloomsbury translation) * Alaric Searle has rendered a great service to the study of modern military history by producing the first comprehensive academic study of armoured warfare from its origins in the First World War to the present day. This book should be regarded as essential reading, not just for those with an interest in tanks, but for those who want to fully understand the evolution of warfare throughout the Twentieth Century. * Timothy Bowman, Senior Lecturer in Modern British Military History, University of Kent, UK * Armoured Warfare: A Military, Political and Global History is an intriguing approach to the history of the tank. Instead of the usual depiction of the technical route of development, this new study places it in the broader context of military doctrine and the combat experience. To further broaden the viewpoint, it offers a valuable international perspective on mechanized warfare. * Steven J. Zaloga, USA * Alaric Searle's Armoured Warfare is a uniquely valuable addition to this literature, offering just the sort of judicious, scholarly but well-written introduction to the subject required by students in universities and military academies and also by the intelligent general reader... In short this is an exemplary introductory work on armoured forces and armoured warfare for the 21st-century student. * Paul Harris, Royal Military Academy Sandhurst, UK * Accessible, comprehensive, and authoritative, Armoured Warfare is an excellent overview of the subject. I recommend it to anyone who is looking for a thorough introduction to, or reliable review of, the mechanized military operations of the past century. * Bruce Ivar Gudmundsson, Marine Corps University, USA * Not only for tank enthusiasts, [ it's] an exciting, interesting read. * Militargeschichtliche Zeitschrift (Bloomsbury Translation) * Strongly recommended to anyone that wants a reliable and sure-footed guide to the history of armoured warfare and it will suit audiences from the general reader to the specialist. In particular, this is an excellent primer for undergraduates going on to higher level studies and they will gain a good understanding of the underpinnings of armoured warfare from this excellent book. * British Journal for Military History *

A global history of armoured warfare, considering its role in major wars and campaigns and its political symbolism.
Alaric Searle is Professor of Modern European History at the University of Salford, UK.
Show moreShow less
Ienākt Jauns profils