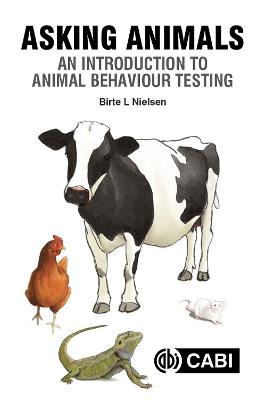 Palielināt
Citas grāmatas par šo tēmu:
Permanent link: https://www.kriso.lv/db/9781789240610.html
Keywords:
Contemporary, thought-provoking yet utterly practical, this book provides an introductory text covering the use and misuse of behavior tests applied to animals. By including illustrative examples from a variety of species, the book inspires the animal scientist to think about what a given behavioral test can be used for and how the results can be interpreted. This text includes: the dos and don'ts of running behavior tests and interpreting the results; many clear, simple illustrations which make the information readily accessible; down-to-earth, practical advice combined with a thorough, evidence-based approach; information on behavior tests for a whole range of species from companion, farm, zoo, laboratory and wild animals--all in in a succinct yet comprehensive text. This book is an essential item in the researcher's toolkit when embarking on and devising any animal behavior test and is valuable to students, established researchers, teachers and practitioners of applied ethology, animal welfare science, and veterinary science.

This book is an essential item in the researcher's tool kit when embarking on and devising any behaviour test and is valuable to students, established researchers, teachers and practitioners of applied ethology, animal welfare science, and veterinary science.
Part I: Setting the Scene 1: Five Things This Book is Not 2: Non-Test Observations 3: How to Choose a Test Part II: Types of Tests 4: Tests to Characterize the Animal 5: Choice, Preference and Motivation 6: Ability to Detect and Distinguish 7: Effects of Age and Treatment 8: Reinforcement and Punishment 9: Learning Capacity, Memory and Cognitive Ability 10: Genetic Components of Behaviour Part III: Additional Aspects 11: Other Test Considerations 12: Legislation, Guidelines and Ethical Considerations 13: Future Methodologies and Technological Advances
Since 2010, Dr Nielsen has worked at the National Institute of Agricultural Research (INRA) in France as member of a neurobiology unit specializing in olfaction. As an ethologist, she studies the behavioural responses of rats to different smells, with emphasis on biologically relevant odours, such as those associated with sex or with predators. The aim of the research is to link the odour-based behaviour of rodents to the neurological responses observed with the same odours. Dr Nielsen has previously been in charge of the research unit for Behaviour and Stress Biology at Aarhus University, Denmark, where she worked for 12 years, mainly on poultry behaviour. Before that, spending 8 years in Edinburgh, Scotland, completing a PhD on pig feeding behaviour and working as a post doc on metabolic stress in dairy cows. She has in-depth experience in experimental behaviour science on rats, growing pigs, dairy cows, broiler chickens and broiler breeders, and has been actively involved in work on horses, sows, laying hens and ostriches. This has given her a broad footing in basic and applied ethology, and allowed her to partake in various expert panels and working groups, such as chairing the Danish Animal Welfare Council (2005-2010). Dr Nielsen is a member of the Animal Welfare working group at the French Agency for Food, Environmental and Occupational Health and Safety (Anses). She is deputy section editor for the journal Animal (Cambridge University Press) and served as President of the International Society for Applied Ethology (ISAE) in 2016. Dr Nielsen is author of Olfaction in Animal Behaviour and Welfare.
Show moreShow less
Ienākt Jauns profils