Assembling the Dinosaur: Fossil Hunters, Tycoons, and the Making of a Spectacle [Hardback] 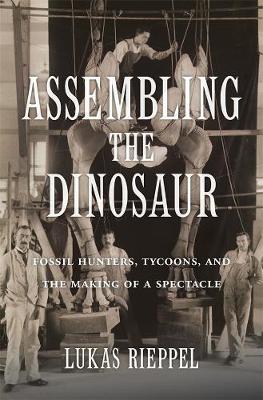 A lively account of how dinosaurs became a symbol of American power and prosperity and gripped the popular imagination during the Gilded Age, when their fossil remains were collected and displayed in museums financed by North America’s wealthiest business tycoons.

Although dinosaur fossils were first found in England, a series of dramatic discoveries during the late 1800s turned North America into a world center for vertebrate paleontology. At the same time, the United States emerged as the world’s largest industrial economy, and creatures like Tyrannosaurus, Brontosaurus, and Triceratops became emblems of American capitalism. Large, fierce, and spectacular, American dinosaurs dominated the popular imagination, making front-page headlines and appearing in feature films.

Assembling the Dinosaur follows dinosaur fossils from the field to the museum and into the commercial culture of North America’s Gilded Age. Business tycoons like Andrew Carnegie and J. P. Morgan made common cause with vertebrate paleontologists to capitalize on the widespread appeal of dinosaurs, using them to project American exceptionalism back into prehistory. Learning from the show-stopping techniques of P. T. Barnum, museums exhibited dinosaurs to attract, entertain, and educate the public. By assembling the skeletons of dinosaurs into eye-catching displays, wealthy industrialists sought to cement their own reputations as generous benefactors of science, showing that modern capitalism could produce public goods in addition to profits. Behind the scenes, museums adopted corporate management practices to control the movement of dinosaur bones, restricting their circulation to influence their meaning and value in popular culture.

Tracing the entwined relationship of dinosaurs, capitalism, and culture during the Gilded Age, Lukas Rieppel reveals the outsized role these giant reptiles played during one of the most consequential periods in American history.

Complex and thought provoking...It demonstrates how dinosaur discovery has affected both science and society.--Choice (11/01/2019) Highly recommended for anyone interested in the cultural-historical aspects of the study of prehistory.--Justin Mullis"AiPT! Science" (10/04/2019) Readers with an interest in the history of palaeontology will be particularly well-served by this book.--Inquisitive Biologist (12/01/2019) Rieppel traces the commingling of capitalism and science...Thrilling museum fossil displays burnished the reputations of philanthropists who backed the institutions, such as Andrew Carnegie and J. P. Morgan--even as the tycoons twisted the dinosaurs' demise into a metaphor for the advance of 'enlightened' corporate culture.-- (07/04/2019) Resting on broad erudition and an expansive historical imagination, Assembling the Dinosaur explores the relationship of science, culture, and economy in the Gilded Age. It is a unique contribution to our understanding of the making of modern America.--Michael Zakim, author of Accounting for Capitalism: The World the Clerk Made This innovative book reinterprets the discovery of dinosaurs in the American West as a compelling aspect of the country's culture at a time of dramatic economic expansion. Highly recommended as a stimulating account of science during the Gilded Age and beyond.--Janet Browne, author of Charles Darwin: Voyaging The nineteenth century saw the simultaneous rise of industrial capitalism and the discovery of dinosaurs. These hulking creatures, expensive to excavate and to display, became a perfect match for the self-presentation of the rising economic elite in the United States. Connecting the history of capitalism and the history of science, this important book traces how the shifting presentation of these fossils--from massive, slow moving, and solitary to agile and social--mirrored the transition from giant corporations to nimble startups.--Sven Beckert, author of Empire of Cotton: A Global History A brilliant, original history of dinosaurs set within the landscape of American science, capitalism, and culture. Rieppel integrates the practices and ambitions of vertebrate paleontologists, the patronage they found among wealthy industrialists, and the public's fascination with these colossal creatures from the deep past--from the discovery of fossil remains in the American West at the turn of the twentieth century through their assembly in emergent museums of natural history. Resting on extensive archival research and apt illustrations, Assembling the Dinosaur is an altogether authoritative and captivating work.--Daniel J. Kevles, Living Properties: Making Knowledge and Controlling Ownership in the History of Biology A penetrating study of legitimacy and capitalism in the realm of fossils. It traces the parallel growth of paleontology and the public museums in which dinosaur fossils often end up being housed...Perhaps what Rieppel is studying, really, is the way museums distinguish themselves, intellectually and economically, from the Barnum-like hustle of their dime-museum predecessors...The museum seems now to be a more purified place. And yet it's worth reading Rieppel on the work of legacy-laundering before you stop by to see the newest T. rex in its David H. Koch Dinosaur Wing.-- (12/19/2019) Assembling the Dinosaur is a solid entry into the growing body of literature on Gilded Age American paleontology, but it is particularly valuable for its contribution to enhancing our understanding of how science and its representation during that period were influenced by, and in turn affected, society as a whole. By incorporating cultural, economic, and scientific developments, Rieppel shines new light on the history of both American paleontology and museum exhibition practice.-- (06/17/2019)

Show moreShow less
Lukas Rieppel is the David and Michelle Ebersman Assistant Professor in the Department of History at Brown University. He has held fellowships from the Max Planck Institute for the History of Science in Berlin, the Charles Warren Center for American History at Harvard University, the Science in Human Culture Program at Northwestern University, and the American Academy of Arts and Sciences.
Show moreShow less
Ienākt Jauns profils