Baal, St. George, and Khidr: A Study of the Historical Geography of the Levant [Hardback] 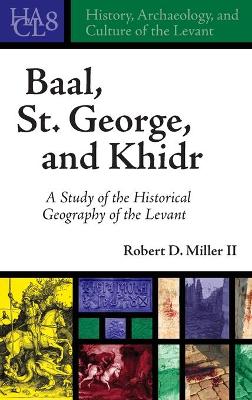 In Western tradition, St. George is known as the dragon slayer. In the Middle East, he is called Khidir (“Green One”), and in addition to being a dragon slayer, he is also somehow the prophet Elijah. In this book, Robert D. Miller II untangles these complicated connections and reveals how, especially in his Middle Eastern guise, St. George is a reincarnation of the Canaanite storm god Baal, another “Green One” who in Ugaritic texts slays dragons.

Combining art history, theology, and archeology, this multidisciplinary study demystifies the identity of St. George in his various incarnations, laying bare the processes by which these identifications merged and diverged. Miller traces the origins of this figure in Arabic and Latin texts and explores the possibility that Middle Eastern shrines to St. George lie on top of ancient shrines of the Canaanite storm god Baal. Miller examines these holy places, particularly in modern Israel and around Mount Hermon on the Syrian-Lebanese-Israeli border, and makes the convincing case that direct continuity exists from the Baal of antiquity and early Christianity to the St. George/Khidr of Christian lore.

Show moreShow less
Robert D. Miller II is Ordinary Professor of Old Testament and Associate Dean for Graduate Studies in the School of Theology and Religious Studies at the Catholic University of America, as well as Research Associate in the Department of Old Testament at the University of Pretoria and a member of the Secular Franciscan Order.
Show moreShow less
Ienākt Jauns profils