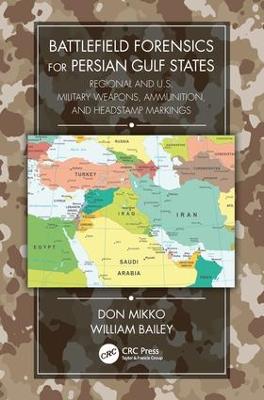 Battlefield Forensics for Persian Gulf States provides an illustrative reference of various weapons, toolmarks, headstamps, and other traits in order to identify the origins of a variety of guns, casings, and ammunition that can be found in the Middle East. Various conflicts in the region have led to innumerable weapons being used throughout the years of the many years. The lead authors has investigated investigated and examined firearms related items of evidence in countless crime scenes throughout the world. As the Chief of the Firearms Branch at the United States Army Criminal Investigation Laboratory (USACIL), Fort Gillem, Georgia, he recruited trained and competency testing military contractors deploying to various combat related areas of the world, those providing forensic firearm and toolmark identification support to the local commanders. What was leared was that various foreign weapons and ammunition were being utilized in conflicts and opposing forces.

This book educates readers of the technical data on different types of firearms, ammunition, county of origin, proof marks, penetrator information and the typical firearm markings imparted on fired cartridge cases, such as breech-face, firing pin, ejector and extractor markings. Forensics and biometrics within the Persian Gulf have been leveraged since the early 1990s and many of the firearms and types of ammunition covered in this handbook are addressed in an effort to assist those on the ground who required to be able to identify such items in various scenarios. The information contained within the book has proven to be effective on the battlefield and has helped shape combat operations.

This handbook will serve as a useful reference not only assist military and contractor personnel within the various combat locations, it will also prove to be beneficial for law-enforcement, crime laboratory personnel, forensic firearm and toolmark examiners, crime scene investigators, students, practitioners and civilian personnel throughout the world.