Bringing Down the Iron Curtain: Paradigmatic Change in Research on the Bronze Age in Central and Eastern Europe? [Mīkstie vāki] 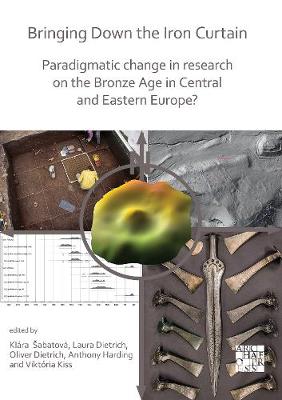 Palielināt
Citas grāmatas par šo tēmu:
Permanent link: https://www.kriso.lv/db/9781789694543.html
Bringing down the Iron Curtain: Paradigmatic changes in research on the Bronze Age in Central and Eastern Europe? presents the researches of scholars of different generations from twelve countries (Hungary, Romania, Czech Republic, Slovakia, Serbia, Croatia, Ukraine, United Kingdom, Germany, USA, Canada, Austria) who participated in a session of the same title at the 20th Meeting of the European Association of Archaeologists in Istanbul, 2014. The papers addressed the question of change in the approaches to Bronze Age research in the Central and Eastern European countries from different points of view. It has been a quarter of a century since the fall of communism in Central and Eastern Europe and the opening up of these areas to the West. With this process, archaeology saw a large influx of new projects and ideas. Bilateral contacts, Europe-wide circulation of scholars and access to research literature has fuelled the transformation processes. This volume is the first study which relates these issues specifically to Bronze Age Archaeology. The contributions discuss not only theoretical issues, but also current developments in all aspects of archaeological practice.

Since the fall of communism, archaeological research in Central and Eastern European countries has seen a large influx of new projects and ideas, fueled by bilateral contacts, Europe-wide circulation of scholars and access to research literature. This volume is the first study which relates these issues specifically to Bronze Age Archaeology.
Show moreShow less
Bringing down the Iron Curtain: paradigmatic changes in research on the Bronze Age in Central and Eastern Europe? Introductory thoughts - Oliver Dietrich, Laura Dietrich, Anthony Harding, Viktoria Kiss, Klara Sabatova ; Part 1: Paradigmatic change? Views from the subdisciplines of Bronze Age studies ; The Hajdusamson hoard - revisited - Janos Dani, Ernst Pernicka, Gabor Markus ; Culture or ceramic style? On a long-lived and widely distributed paradigm in Romanian archaeology - Laura Dietrich ; Paradigm change, the Iron Curtain, and bronze artefacts. A view from Romania - Oliver Dietrich ; Cultural layers on lowland settlement sites - accepted or ignored? The case of Bohemia. Remarks on discussions regarding the 'new paradigm' - Michal Ernee ; Research on the Early Iron Age hillfort of Smolenice-Molpir in the Western Carpathians - Michal Felcan, Roman Pasteka, Susanne Stegmann-Rajtar ; From typochronology to postprocessualism: regional settlement research in the northern part of the Carpathian Basin - Klara P. Fischl, Tamas Pusztai ; Methodological changes in and new approaches to research on the Bronze Age in Bohemia since 1990 - Lubos Jiran, Ondrej Chvojka, Tereza Salkova ; On the interpretation of Bronze Age tell settlement in the Carpathian Basin. The Borsod example - Tobias L. Kienlin, Klara P. Fischl ; 'Europe without walls': new directions of Bronze Age research in Hungary - Viktoria Kiss, Gabriella Kulcsar ; Change or no change? Archaeology of the Middle and Late Bronze Age in Moravia, Czech Republic - Klara Sabatova ; Paradigm shift? Bronze Age tell archaeology after
1989. Reflections from the Szazhalombatta-Foeldvar Excavation Project - Marie-Louise Stig Sorensen, Magdolna Vicze, Joanna Sofaer ; Part 2: Change or no change - experiences of working in Eastern Central Europe before and after 1989 ; Zeitgeist - David J. Breeze ; 1989 and all that - John Chapman ; Flying behind the curtain: establishing an aerial reconnaissance programme in Romania - W. S. Hanson, I. A. Oltean ; Romania and Bulgaria: transition or continuity? Changes in attitudes and methods before and after the fall of the Iron Curtain - A. G. Poulter
Laura Dietrich studied prehistoric archaeology in Bucharest and Berlin. She has worked on projects from south-eastern Europe to the Levant, and since 2011 has been a Research Assistant at the German Archaeological Institute. Her research focuses on the archaeology of food and conflict. Oliver Dietrich studied prehistoric archaeology in Berlin and works at the German Archaeological Institute. His research focus is the Neolithic and Bronze Age between south-eastern Europe and the Near East. His interests include archaeology of religion and cult, metallurgy, agents of craft in prehistory and distribution modes of prehistoric innovations. Anthony Harding is Emeritus Professor of Archaeology at the University of Exeter, UK, and an Affiliate of the Philosophical Faculty of Charles University, Prague. He specialises in European Bronze Age archaeology and has written several books and many articles on various aspects of the Bronze Age. He has led excavations in Poland, the Czech Republic and Romania as well as Britain. In recent years he has worked extensively on the archaeology of salt exploitation. Viktoria Kiss is a senior research fellow of the Institute of Archaeology, Research Centre for the Humanities of the Hungarian Academy of Sciences. She specialises in Central European Bronze Age archaeology. She has written a book about Middle Bronze Age Encrusted Pottery in Western Hungary, and edited several other volumes concerning the Bronze Age archaeology of the region. In recent years she has worked on pottery, metal production, bioarchaeology and mobility. Klara Sabatova studied archaeology at Masaryk University, Brno, Czech Republic, and teaches prehistory there. Her research focuses on Bronze Age and landscape archaeology in Central Europe. Her interests include the processing of large quantities of pottery and settlement archaeology. She has led excavations on Neolithic and Bronze Age sites in Moravia. At present she is particularly concerned with Bronze Age chronology and burial rites.
Show moreShow less
Ienākt Jauns profils