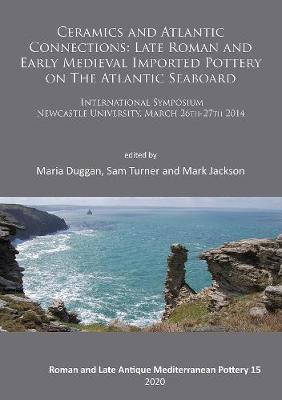 Palielināt
Citas grāmatas par šo tēmu:
Permanent link: https://www.kriso.lv/db/9781789693379.html
Keywords:
The Atlantic Seaboard has attracted increasing interest as a zone of economic complexity and social connection during Late Antiquity and the early medieval period. A surge in archaeological and, in particular, ceramic research emerging from this region over the last decade has demonstrated the need for new models of exchange between the Mediterranean and Atlantic, and for new understandings of links between sites along the Western littoral of Europe. Ceramics and Atlantic Connections: Late Roman and Early Medieval Imported Pottery on the Atlantic Seaboard stems from the&#160;Ceramics and Atlantic Connections&#160;symposium, hosted by the School of History, Classics and Archaeology, Newcastle University, in March 2014. This represents the first international workshop to consider late Roman to early medieval pottery from across the Atlantic Seaboard. Reflecting the wide geographical scope of the original presentations by the invited speakers, these nine articles from ceramic specialists and archaeologists working across the Atlantic region, cover western Britain, Ireland, western France, north-west Spain and Portugal.

The principal focus is the pottery of Mediterranean origin which was imported into the Atlantic, particularly East Mediterranean and North African amphorae and red-slipped finewares (African Red Slip and Late Roman C and D), as well as ceramics of Atlantic production which had widespread distributions, including Gaulish D&#233;riv&#233;es-de-Sigill&#233;es Pal&#233;ochr&#233;tiennes Atlantique/DSPA, c&#233;ramique &#224; l&;&#233;ponge&; and &;E-ware&;. Following the aims of the Newcastle symposium, the papers examine the chronologies and relative distributions of these wares and associated products, and consider the compositions of key Atlantic assemblages, revealing new insights into the networks of exchange linking these regions between c. 400-700 AD. This broad-scale exploration of ceramic patterns, together with an examination of associated artefactual, archaeological and textual evidence for maritime exchange, provides a window into the political, economic, cultural and ecclesiastical ties that linked the disparate regions of the Late Antique and early medieval Atlantic. In this way, this volume presents a benchmark for current understandings of ceramic exchange in the Atlantic Seaboard and provides a foundation for future research on connectivity in this zone.