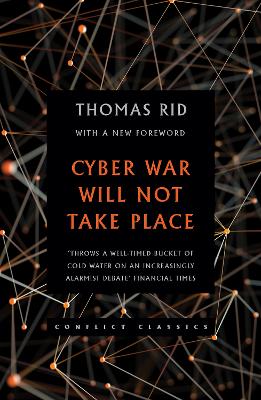 Palielināt
Citas grāmatas par šo tēmu:
Permanent link: https://www.kriso.lv/db/9781849047128.html
Keywords:
** New epilogue 'Cyber War Will Take Place!' by John Stone** 'Cyber war is coming,' announced a landmark RAND report in 1993. In 2005, the U.S. Air Force boasted it would now fly, fight, and win in cyberspace, the 'fifth domain' of warfare. This book takes stock, twenty years on: is cyber war really coming? Has war indeed entered the fifth domain? Cyber War Will Not Take Place cuts through the hype and takes a fresh look at cyber security. Thomas Rid argues that the focus on war and winning distracts from the real challenge of cyberspace: non-violent confrontation that may rival or even replace violence in surprising ways.The threat consists of three different vectors: espionage, sabotage, and subversion. The author traces the most significant hacks and attacks, exploring the full spectrum of case studies from the shadowy world of computer espionage and weaponised code. With a mix of technical detail and rigorous political analysis, the book explores some key questions: What are cyber weapons? How have they changed the meaning of violence? How likely and how dangerous is crowd-sourced subversive activity? Why has there never been a lethal cyber attack against a country's critical infrastructure?How serious is the threat of 'pure' cyber espionage, of exfiltrating data without infiltrating humans first? And who is most vulnerable: which countries, industries, individuals?
Show moreShow less

'In Cyber War Will Not Take Place, Thomas Rid throws a well-timed bucket of cold water on an increasingly alarmist debate. Just as strategic bombing never fulfilled its promise, and even air power at its apogee -- Kosovo in 1999, or Libya two years ago -- only worked with old-fashioned boots on the ground, Rid argues that the promise of cyber war is equally illusory... What Rid does, with great skill, is to pivot the discussion away from cyber war and towards cyber weapons.' * Financial Times * 'Thomas Rid is one of Britain's leading authorities on, and sceptics about, cyber-warfare. His provocatively titled book attacks the hype and mystique about sabotage, espionage, subversion and other mischief on the internet. Rid agrees that these present urgent security problems but he dislikes talk of "warfare" and the militarisation of the debate about dangers in cyberspace. Computer code can do lots of things, but it is not a weapon of war.' * The Economist * 'This book will be welcomed by all those who have struggled to get the measure of the cyber-war threat. As Thomas Rid takes on the digital doomsters he also provides a comprehensive, authoritative and sophisticated analysis of the strategic quandaries created by the new technologies.' * Sir Lawrence Freedman, Professor of War Studies, King's College London * 'Rid stands as a useful voice among the Cassandras and Chicken Littles who warn of the impending cyber apocalypse. He bridges the divide between law and technology, and serves as the standard bearer for those hoping to lead the cyber-war debate out of what he calls the 'realm of myth and fairytale' into rational, empirical discussion.' * Sydney Morning Herald * 'This book provides a thorough and timely analysis of cyber conflict and makes a reasonable case to temper the dialogue around cyber war.' * International Affairs * 'Thomas Rid provides an unusually level-headed view of where we are in the cyber arms race. This book nips in the bud the loose talk of cyberwar and illustrates what's really happening. Anyone involved in building defences against future attacks should read this book first.' * Mikko Hypponen, virus analyst and Chief Research Officer, F-Secure * 'We're in the early years of a cyberwar arms race, one fuelled by both fear and ignorance. This book is a cogent counterpoint to both the doomsayers and profiteers, and should be required reading for anyone concerned about our national security policy in cyberspace.' * Bruce Schneier, security guru and author of Liars and Outliers: Enabling the Trust Society Needs to Thrive * 'Thomas Rid takes a razor to the evidence and carefully dissects the evolution of conflict and espionage in the cyber age. The result is a compelling and authoritative take on war and strategy in cyberspace, one that will surely be seminal in this area for years to come.' * Ronald J. Deibert, Citizen Lab Director and author of Black Code: Inside the Battle for Cyberspace * 'Cyber War Will Not Take Place is a foundation text in the cyber security field, [ and] any responsible scholar should use this volume to counter the divergent perspective.' * Brandon Valeriano, H-Diplo * 'A stimulating read for anyone interested in the field of security studies.' * Journal for Intelligence, Propaganda and Security Studies * 'The information problem about cyber-war means that in some sense we must grope in the dark. Yet Rid's book is valuable precisely because it offers a careful assessment of what we do know. It will be an essential work for some years to come.' * RUSI Journal * `Undoubtedly . . . a classic . . the book has helped to structure the cyber-conflict debate in meaningful ways and can be considered one of the must-reads for students, journalists and analysts.'