Dictionary of the Undoing [Hardback] 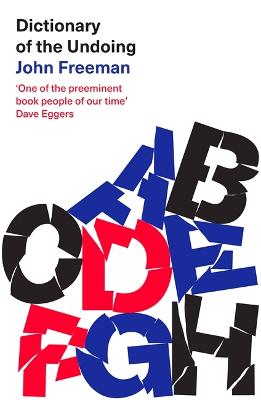 Palielināt
Citas grāmatas par šo tēmu:
Permanent link: https://www.kriso.lv/db/9781472154774.html
For John Freeman - literary critic, essayist, editor, poet and 'one of the preeminent book people of our time' (Dave Eggers) - it is a rare moment when words are not enough. But in the wake of the election of 2016, words felt useless, even indulgent. Action was the only reasonable response. He took to the streets in protest and the sense of community and collective conviction felt right. But the assaults continued - on citizens' rights and long-held compacts, on the core principles of our culture and civilisation, and on our language itself. Words seemed to be losing the meanings they once had and Freeman was compelled to return to their defence. The result is his Dictionary of the Undoing. From A to Z, 'Agitate' to 'Zygote,' Freeman assembled the words that felt most essential, most potent, and began to build a case for their renewed power and authority, each word building on the last. The message that emerged was not to retreat behind books, but to emphatically engage in the public sphere, to redefine what it means to be a literary citizen. With an afterword by Valeria Luiselli, Dictionary of the Undoing is a necessary, resounding cri de coeur in defense of language, meaning, and our ability to imagine, describe, and build a better world.
Show moreShow less

"[ John Freeman] offers an alphabet of hope and action in this spare, eloquent meditation . . . The representative words, including resonant headings such as citizen, justice, and rage, introduce extended definitions that are sobering, probing, and precise . . . A protest, a poem, and a plea, Freeman's utterly original manifesto is a pocket manual for informed political dissent and a must-read for all thinking citizens." * Publishers Weekly (starred review) *

Show moreShow less
John Freeman is the editor of Freeman's, a literary annual of new writing, and executive editor of the Literary Hub. His books include How to Read a Novelist and The Tyranny of E-mail, as well as Tales of Two Americas, an anthology of new writing about inequality in the U.S. today. Maps, his debut collection of poems, was published in 2017. His work has been translated into more than twenty languages and has appeared in The New Yorker, The Paris Review, and The New York Times. The former editor of Granta, he is Writer in Residence at New York University.
Show moreShow less
Ienākt Jauns profils