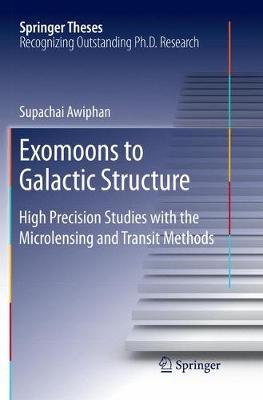 This book presents three major studies covering exomoon and exoplanet detection and characterisation. Firstly, it reports the observations and analysis of the atmosphere of the hot Neptune GJ3470b, one of the lowest-mass planets with a measured atmosphere, using transmission spectroscopy techniques. The result provided improved measurements of Rayleigh scattering in the atmosphere and the first limits on additional planetary companions in the system. The second part discusses modeling a Kepler-like satellite’s ability of a to detect exomoons by looking for transit timing variations and transit duration variations, demonstrating how exomoons can unambiguously be identified from such data.Lastly, the book examines the development of a state-of-the-art Galactic microlensing simulator, which has been made publicly available. It was used to compare with the largest published sample of microlensing events from the MOA-II survey.

Show moreShow less
Introduction.- TTV and Transmission Spectroscopy of GJ3470b.- Detectability of Habitable Exomoons.- Microlensing Maps of the Galaxy.- BesanCon Model Simulations of MOA-II.- Summary and Future Works.
Supachai Awiphan is a researcher at the National Astronomical Research Institute of Thailand in Thailand. His research interests include exoplanet and exomoon detection and characterisation using the transit and microlensing techniques. He received his B.Sc. in Physics from Chiang Mai University in 2010, and his M.Sc. and Ph.D. in Astronomy and Astrophysics from the School of Physics and Astronomy, the University of Manchester in 2012 and 2016, respectively. He held a presitiguous Royal Thai Society Government grant for his M.Sc. and Ph.D. studies, as well as being the recipient of a coveted the University of Manchester President's Doctoral Scholarship Award.
Show moreShow less
Ienākt Jauns profils