Two in the Far North, Revised Edition: A Conservation Champion's Story of Life, Love, and Adventure in the Wilderness 6th edition [Mīkstie vāki] 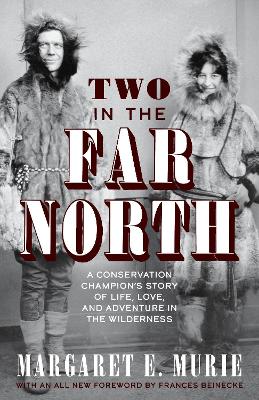 A Northern classic and beloved favorite, Two in the Far North chronicles the incredible story of Margaret “Mardy” Murie, called the Grandmother of the Conservation Movement, and how she became one of the first women to embrace and champion wilderness conservation in America.

At the age of nine, Margaret Murie moved from Seattle to Fairbanks, not realizing the trajectory life would take her from there. This moving testimonial to the preservation of the Arctic wilderness comes straight from her heart as she writes about growing up in Fairbanks, becoming the first woman graduate of the University of Alaska, and meeting—and then marrying—noted biologist Olaus J. Murie. So begins her lifelong journey in Alaska and on to Jackson Hole, Wyoming, where along with her husband and others they founded The Wilderness Society to protect nature and wildlife and speak out for ecological consciousness. From adventures of traversing over thin ice with dog sleds, camping in woods surrounded by bears, caribou, and other wildlife, to canoeing in streams with geese nearby, and more, Murie embraced nature as a close neighbor and dedicated her life to advocating for wilderness protection and conservation.

First published in 1962, this edition features a new foreword by Frances Beinecke and an afterword from Donald Murie. Margaret Murie inspires readers to join her in finding life, love, and adventure in the beautiful remote Alaskan wilderness and the natural world beyond.

"This book, first written in the 1950s and still in print, is authored by the grand dame of the wilderness movement, Margaret Murie. Margaret has helped generations of men and women understand the need to preserve wild landscapes. In Two in the Far North, she describes her life in Alaska: her growing up in Anchorage and her adventurous trips into the Alaska wilderness with her husband and biologist, Olaus. It is a wonderful read and a true American wilderness classic." * Winner of the National Outdoor Book Award * "Reminiscences of Alaska told from a woman's angle go back to the steamboat, goldmining days of 1911 when the writers's stepfather became Assistant US Attorney and the family moved from Seattle to Fairbanks. Her childhood's impressions of the social round, whist, sewing and church clubs in an isolated boom town are succeeded by a lyrical account of three expeditions to untouched areas in Alaska on which the author accompanied her biologist husband. It was at first difficult to adapt herself from the relative comforts of smalltown life to the demands of outdoor living during months-long trips by husky-drawn sleigh, by boat or on foot. However, the people, wildlife and terrain are enthusiastically and knowledgeably described in her book. Her pioneering spirit stands out in this account of her adventures which is marked by a gift for detail and a sense of humor. In addition, it is a timely reminder of the need for taking steps to preserve wildlife in America's most northern State on which the bulldozer is fast encroaching." * Kirkus Reviews * "Teton Science Schools students young and old have learned from Two in the Far North for decades. In conservation, in education, and in life, Mardy's words are as true in the 21st century as they were over 60 years ago." * Chris Agnew, Teton Science Schools (TSS) Executive Director * "Simply put, Mardy Murie is a national treasure. Her life has made a certain kind of life possible for the rest of us. Generations to come will feel her imprint, though they may not know it was how she lived her life that allowed them to witness some of the last wild places on Earth. They may not know that it is because of her life that their souls and spirits can be fed by what is natural and wild. I hope those who come long after us will have TWO IN THE FAR NORTH in their satchels as they gaze upon these natural wonders and that they, too, will come away with same resolve she ad to protect these incredible gifts." * Robert Redford *

Winner of National Outdoor Book Award 1998.Targeted Murie Center launch in Wyoming with author's 3rd son, Donald Murie and foreword writer. Giveaways and promotion at conservation conferences like The National Wildlife Federation's Women in Conservation Leadership Summit March 16-19, 2020, in Colorado Springs. Online promotion through social media to fans of the book and select target audiences, as well as cooperative promotion with Murie Center, Sierra Club, Wilderness Society, etc. Targeted excerpts and reviews in regional, history, outdoor, women's, and nature/environment/conservation sources and sources like NPR, NYT, Outside Magazine, etc. that have featured the Muries in the past. Advertising in PNBA holiday catalog ad, Ingram e-comm to libraries and bookstores. Vine, Goodreads, Indie Advance Access giveaways to generate reviews. Interviews and Skypes with Donald Olaus Murie. Featured at PNBA, MPIBA, ALA, BEA and targeted giveaways at Outdoor Retailer and APPL and WNPA, etc.
preface foreword part one: fairbanks 1 to the north 2 freeze-up 3 the town 4 winter 5 mail day 6 spring 7 summer 8 the trail 9 and over the mountains part two: the upper koyukuk 10 home to romance 11 anvik 12 nulato 13 willow river 14 alatna 15 "and beyond" 16 bettles 17 one day of it 18 on the river ice 19 wiseman 20 the mountains part three: the old crow river 22 tanana and yukon 23 the porcupine 24 the old crow 25 by main strength 26 geese 27 downstream part four: sheenjek 28 north again 29 at lobo lake 30 both sides of the river 31 up the valley 32 tundra and mountain 33 caribou 34 to the head of the river 35 autumn in august part five: return to the mountains 36 again north 37 sheenjek again part six: afterward 38 1967 alaska 39 another new alaska-1975 40 outside-1975 to 1989
Born in Seattle, Washington, in 1902, Margaret E. Murie was a naturalist, conservationist, and author who has been called the "grandmother of the conservation movement" for her efforts in helping establish the Arctic National Wildlife Refuge in Alaska. She received several awards for her conservation work, including the Audubon Medal, the John Muir Award, and the Robert Marshall Conservational Award. In 1998 she received the Presidential Medal of Freedom from President Clinton, and in 2002 the J.N. Ding Darling Conservationist of the Year Award. Murie was also made an Honorary Park Ranger by the National Parks Service for her passion and commitment to preserving the natural world and wildlife. She died at her home in Moose, Wyoming, in 2003 at the age of 101. Frances Beinecke is an environmental activist and wilderness advocate. She was appointed by President Barack Obama to the National Commission on the BP Deepwater Horizon Oil Spill and Offshore Drilling in 2010, and has served for organizations dedicated to nature conservation and preservation, including the Wilderness Society, the World Resources Institute, the Nature Conservancy, and more. Beinecke is the recipient of the Robert Marshall Award, the Wilderness Society's highest award presented to a private citizen who has never held federal office, as well as the Rachel Carson Award, the National Audubon's Society's honor for distinguished American women environmentalists.
Show moreShow less
Ienākt Jauns profils