Fire in the Sky: Cosmic Collisions, Killer Asteroids, and the Race to Defend Earth [Hardback] 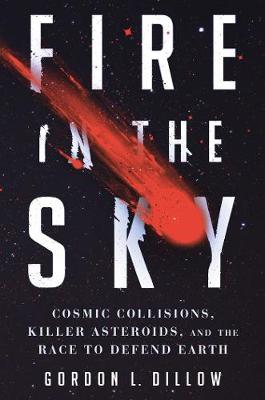 Palielināt
Citas grāmatas par šo tēmu:
Permanent link: https://www.kriso.lv/db/9781501187742.html
Keywords:
Combines history, pop science, and in-depth reporting in a chronicle of the role of asteroid collisions in Earth's evolution and how scientists are preparing for the next impact catastrophe.

The co-author of Blue on Blue combines history, pop science and in-depth reporting in a chronicle of the role of asteroid collisions in Earth's evolution and how today's scientists are preparing against the next impact catastrophe. 50,000 first printing.

Combining history, pop science, and in-depth reporting, a fascinating account of asteroids that hit Earth long ago, and those streaming toward us now, as well as how we are preparing against asteroid-caused catastrophe.

One of these days, warns Gordon Dillow, the Earth will be hit by a comet or asteroid of potentially catastrophic size. The only question is when. In the meantime, we need to get much better at finding objects hurtling our way, and if they’re large enough to penetrate the atmosphere without burning up, figure out what to do about them.

We owe many of science’s most important discoveries to the famed Meteor Crater, a mile-wide dimple on the Colorado Plateau created by an asteroid hit 50,000 years ago. In his masterfully researched Fire in the Sky, Dillow unpacks what the Crater has to tell us. Prior to the early 1900s, the world believed that all craters—on the Earth and Moon—were formed by volcanic activity. Not so. The revelation that Meteor Crater and others like it were formed by impacts with space objects has led to a now accepted theory about what killed off the dinosaurs, and it has opened up a new field of asteroid observation, which has recently brimmed with urgency. Dillow looks at great asteroid hits of the past and spends time with modern-day asteroid hunters and defense planning experts, including America’s first Planetary Defense Officer.

Satellite sensors confirm that a Hiroshima-scale blast occurs in the atmosphere every year, and a smaller, one-kiloton blast every month. While Dillow makes clear that the objects above can be deadly, he consistently inspires awe with his descriptions of their size, makeup, and origins. At once a riveting work of popular science and a warning to not take for granted the space objects hurtling overhead, Fire in the Sky is, above all, a testament to our universe’s celestial wonders.
Show moreShow less

"A comprehensive and informative treatment of the past, present and potential future of asteroids-whether they be globally hazardous or infinitely valuable." -Chris Lewicki, CEO of Planetary Resources and former Flight Director of the Mars rovers Spirit and Opportunity "The number one threat to the extinction of the human species is a huge asteroid hurtling out of the deep cosmos on a collision course with Earth. This is the book to read before that happens. Compelling and lively, Fire in the Sky is a critically important call to action, because for the first time in our history we can build a defensive system to avoid that fate." -Stephen Petranek, former Editor-in-Chief of Discover and Washington Post magazine, and author of How We'll Live on Mars "It's only a matter of time before a really large space object hits the Earth. Asteroids and comets have created disaster many times in the Earth's past, including the impact that wiped out the dinosaurs, and the vestiges of their havoc are still apparent. Gordon Dillow's enthralling discussion unlocks the secrets of how and why these objects jeopardize the planet and what thousands of people around the globe are doing to detect and defend against them. Fire in the Sky is nonfiction that reads like a great adventure novel even as it points toward a hopeful future for humanity." -Roger D. Launius, former Chief Historian for NASA and author of The Smithsonian History of Space Exploration "Lucid and engaging . . . a comprehensive look at the threat to our planet from asteroid impacts. . . . Dillow stresses that the threat is real, that the Earth is routinely hit by objects from outer space, and that it is certain that sometime in the future-maybe in coming decades, maybe millions of years from now-unless mitigating actions are taken one of those objects will be large enough to cause catastrophic damage. . . . A convincing case for the need to pay more attention to planetary defense." -John M. Logsdon, Founder of the Space Policy Institute at George Washington University, NASA advisor, and editor of The Penguin Book of Outer Space Exploration "Informative, timely and entertaining . . . a great read! Dillow's treatment is never dull-often humorous-and provides accurate information about the potential of near-Earth asteroids for space resources, their impact threats to Earth, and the ongoing activities to mitigate these threats." -Donald K. Yeomans, author of Near-Earth Objects: Finding Them Before They Find Us, and former manager of the Jet Propulsion Laboratory's Near-Earth Object Program Office "Nobody wants to contemplate a giant asteroid smashing into their hometown. But such a catastrophe is basically inevitable, if we don't take measures to prevent it-it's just a matter of when. In Gordon Dillow's engrossing book, we learn a lot about the Solar System, and more important, about our fascination with bodies moving through the skies. That these considerations might someday save our species is a bonus." -Sean Carroll, author of The Big Picture: On the Origins of Life, Meaning, and the Universe Itself "The scope of Fire in the Sky is epic-covering millions of years and spanning the solar system as well as the globe-yet the effect is intimate: Gordon L. Dillow writes with an irresistible You can't make this stuff up sense of personal wonder about asteroid impacts measured in Hiroshimas, the kind of character who manages to misplace a 40-pound chunk of meteorite while on a three-day bender, and the scientists of today who cheerfully go about their work while knowing the end is, if not nigh, inevitable." -Richard Panek, author of The 4% Universe and The Trouble with Gravity "Just when you thought you had enough worries, it looks like chunks of the sky will indeed someday fall. Gordon Dillow's breezy, gentle humor proves an engaging vehicle for absorbing his well-researched, quite serious subject. What's amazing is how refreshing it feels that, at least this time, we're innocent of the resulting global havoc." -Alan Weisman, New York Times bestselling author of The World Without Us and Countdown "A century ago, Scribner published a book about how the world, as many knew it, was ending. It was called The Great Gatsby. Fire in the Sky is our generation's contribution to this crucial theme. Gordon Dillow has written a beautiful and riveting book, a thunderous book, about how we might defend our planet from the collision with a comet or an asteroid that is surely to come." -David H. Levy, co-discoverer of the Shoemaker-Levy 9 Comet, author of Skywatching, Science Editor at Parade, and columnist for Sky and Telescope "In an accessible and always entertaining narrative, Dillow shares the somewhat alarming news that objects from outer space collide with Earth's atmosphere on a regular basis... [ He] describes unimaginable catastrophes with such detail that readers feel like eyewitnesses and reimagines vast expanses of space as easily digestible scenarios...Dillow [ makes a] compelling argument that we really should be paying more attention to the heavens." -Booklist "Journalist Dillow packs quite a punch with this volume about humanity's expanding understanding of the threat posed by objects from space . . . Revealing the estimated chances of a disastrous strike over the next century to be low but not zero, this enjoyable survey should have appeal beyond pop science fans to the researchers and officials concerned with preparing for such a potentially calamitous event." -Publishers Weekly

Show moreShow less
Gordon Dillow has been a reporter, columnist, and war correspondent for more than thirty years. He has written for a number of newspapers, including The Wall Street Journal, Orange County Register, Los Angeles Times, and Los Angeles Herald Examiner, and is the author of Fire in the Sky and coauthor of Where the Money Is, Uppity, and Blue on Blue. He lives in Scottsdale, Arizona.
Show moreShow less
Ienākt Jauns profils