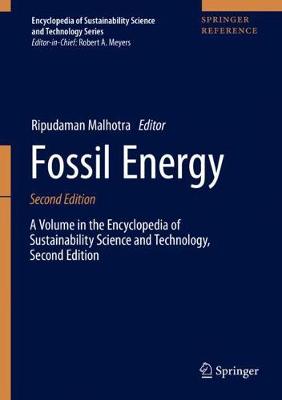 The word sustainability shares its root with sustenance. In the context of modern society, sustenance is inextricably linked to the use of energy. Fossil energy currently represents nearly 85% of global energy consumption. This Second Edition of “Fossil Energy”&nbsp;provides an authoritative yet concise reference on all aspects of this key resource: mining, producing, refining, and usage. Most of the 15 peer-reviewed articles from the First Edition have been updated and, in some instances, extensively revised. In addition, the volume includes four new chapters covering hydraulic fracturing, process simulation tools used in pollution mitigation, and policy options such as carbon pricing and cap-and-trade for reducing carbon emissions. Written by recognized international authorities in the field, this volume represents an essential resource for scientists and engineers working on the development of energy resources, fossil or alternative, and reflects the essential role of energy supplies in supporting a sustainable future.

Ripudaman Malhotra completed his Ph.D. in Chemistry in 1979 at the University of Southern California, Los Angeles, CA, and both M.Sc. and B.Sc. in Chemistry in 1973 and 1971, respectively, at Delhi University, India. He was a research chemist at SRI International from 1979 to 2015 (retired), and during his 36-year tenure at SRI, he worked extensively on the chemistry of processing fossil fuels. His detailed mechanistic studies of these systems have resulted in innovative processes that achieve desired product selectivity and increased efficiency. As someone deeply engaged in energy research, he was acutely aware of the looming energy crisis, which was being exacerbated by the potential of global climate change. He broadened his research interests into studying alternate resources such as biomass and application of biotechnology in the areas of energy, chemicals, and the environment. In 2005, he joined Hew Crane and Ed Kinderman to co-author A Cubic Mile of Oil: The Looming Energy Crisis and Options for Averting It, which was published by the Oxford University press in 2010.Among his technical works are 100 papers in archival literature, co-authorship of a book on nitrations, the editing of a book on combinatorial materials development, and co-editorship of a book on advanced materials. He is a section editor of Encyclopedia of Sustainable Science and Technology and an active member of the Energy and Fuels Division of the American Chemical Society. In 2005, he was named an SRI Fellow, the highest award SRI bestows on its employees for excellence in research, and in 2018, he was named a Fellow of the American Chemical Society. He was honored with Storch Award in Fuel Sciences, Energy and Fuels Division, American Chemical Society, in 2015; Glenn Award, Division of Fuel Chemistry, American Chemical Society, in 1991; and Newcomb Cleveland Prize, American Association for the Advancement of Science, in 1987.
Show moreShow less
Ienākt Jauns profils