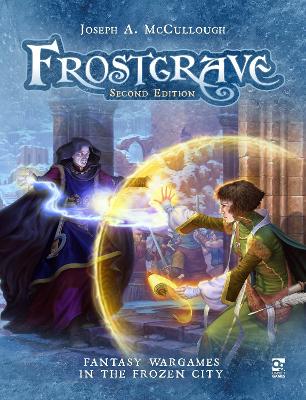 This new edition of the multi-award-winning fantasy skirmish wargame offers improved rules based on years of player feedback, a revised spell list, new soldier types, and a host of brand-new scenarios.

Choose a wizard from one of ten schools of magic, and select from a list of eighty spells. Hire a warband filled with soldiers, from lowly thugs and thieves to mighty knights and barbarians, then lead your men into the frozen ruins of the magic city of Frostgrave on the hunt for ancient treasures and the secrets of lost magic. Be warned -- it is a deadly place, filled with rival wizards, wandering monsters, animated constructs, and demonic entities. Do you dare enter the Frozen City one more time?

A revised and expanded edition of the multi-award-winning fantasy wargame, featuring new spells and scenarios to challenge adventurers in the Frozen City.
Joseph A. McCullough is the author of several non-fiction books including A Pocket History of Ireland, Zombies: A Hunter's Guide, and Dragonslayers: From Beowulf to St. George. In addition, his fantasy short stories have appeared in various books and magazines such as Black Gate, Lords of Swords, and Adventure Mystery Tales. He is also the creator of Frostgrave and Frostgrave: Ghost Archipelago, and co-wrote The Grey Mountains, a supplement for the Middle-Earth Role-Playing Game. His continued ramblings can be read at: therenaissancetroll.blogspot.co.uk aRU-MOR was born in Tarragona, Spain, and studied Fine Arts at the University of Seville, specializing and working on artwork restoration. She began her professional career in 2000, sculpting historical, fantasy, and science-fiction miniatures. These days she combines her work as a sculptor with her work as a freelance illustrator, and has provided illustrations for various Spanish RPGs, books, and card games.
Show moreShow less
Ienākt Jauns profils