Game of Kings: Book One in the Legendary Lymond Chronicles [Mīkstie vāki] 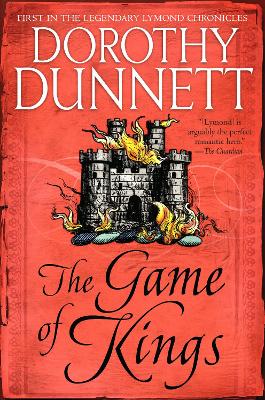 Palielināt
Citas grāmatas par šo tēmu:
Permanent link: https://www.kriso.lv/db/9780525565246.html
Keywords:
Combining all the political intrigue of Game of Thrones with the sweeping romanticism of Outlander, Dorothy Dunnett’s legendary Lymond Chronicles have enthralled readers for decades and amassed legions of devoted fans. The first book in the series introduces Dunnett’s unforgettable antihero as he returns to Scotland with a wild plan to redeem his reputation and save his home.

The year is 1547. Scotland is clinging to independence after a humiliating English invasion. Paradoxically, the country’s freedom may depend on a man who stands accused of treason. He is Francis Crawford of Lymond, a scapegrace nobleman of crooked felicities and murderous talents, with a scholar’s erudition and a wicked tongue. Clawing his way back into a country that has outlawed him, and to a family that has turned its back on him, Lymond will prove that he has both the will and the cunning to clear his name and defend his people—no matter the cost.
Show moreShow less
Show moreShow less
Ienākt Jauns profils