Golden Gate Park, An A to Z Adventure [Hardback] 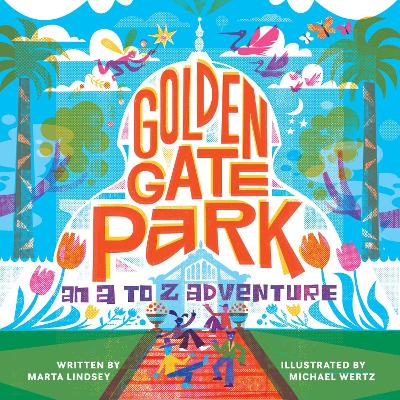 Explore California’s most visited city park in this A-to-Z adventure!

From A for Artist Ruth Asawa’s hanging wire creations in the de Young Museum to Z for the Zebra on the carousel in the Koret Children’s Quarter, this book leads you around San Francisco’s famous Golden Gate Park to reveal a range of fun and surprising facts for tourists and locals alike. Step into art, science, nature, and culture by visiting the park’s major attractions, like the serene Japanese Tea Garden; discovering secret destinations, like the magical fairy doors hidden in trees; or just relaxing on the green meadows where the bison roam. Included also at the back of the book is a colorfully illustrated map with extra trivia and details on the park’s favorite sights.

The board book version of this is available as ABCs of Golden Gate Park.

"Did you know that a famous grizzly bear once lived in Golden Gate Park? Or that in 1921, 25 bison escaped their enclosure at night and roamed the streets of the nearby Richmond district? You couldn't make this stuff up. Written by a GGMG mom of two, this A to Z book will make your family look at GGP with new eyes and will probably inspire you to explore new spots. Fairy doors, anyone." * Golden Gate Mothers Group magazine *

Author events in Bay area. Targeted reviews and mentions in trade, travel, education, children's, and regional media. Facebook/Instagram/Twitter/Pinterest promotions. Submitted to California Library Association and Golden Poppy awards, etc. Additional resources will include: book trailer; author Q&A study guide; and links to online resources. Featured at: CA Booksellers Assoc conf, ALA, BEA.
Marta Lindsey is a children's book author, educator, and communications consultant to nonprofit organizations, with a background in environmental and urban issues. She also volunteers at Point Reyes National Seashore as part of the winter wildlife program and is passionate about nature and wildlife conservation. Originally from Minnesota, Marta now lives in San Francisco, California, just one block from Golden Gate Park, which she visits nearly every day. Michael Wertz is an award-winning illustrator, printmaker, and educator based in Oakland. Known for his playful and vivid imagery, he has collaborated with the de Young Musem, Oakland Museum, New York Times, Oaklandish, and more. His work can be found throughout the city-from the 60-foot mural at Oakland Animal Services to the Oakland Public Library's Fairyland-themed library card.
Show moreShow less
Ienākt Jauns profils