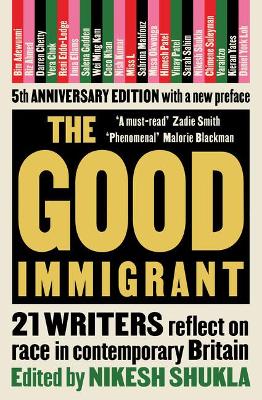 Palielināt
Citas grāmatas par šo tēmu:
Permanent link: https://www.kriso.lv/db/9781783523955.html
Keywords:
How does it feel to be constantly regarded as a potential threat, strip-searched at every airport? Or be told that, as an actress, the part you're most fitted to play is `wife of a terrorist'? How does it feel to have words from your native language misused, misappropriated and used aggressively towards you? How does it feel to hear a child of colour say in a classroom that stories can only be about white people? How does it feel to go `home' to India when your home is really London? What is it like to feel you always have to be an ambassador for your race? How does it feel to always tick `Other'? Bringing together 21 exciting black, Asian and minority ethnic voices emerging in Britain today, The Good Immigrant explores why immigrants come to the UK, why they stay and what it means to be `other' in a country that doesn't seem to want you, doesn't truly accept you - however many generations you've been here - but still needs you for its diversity monitoring forms. Inspired by discussion around why society appears to deem people of colour as bad immigrants - job stealers, benefit scroungers, undeserving refugees - until, by winning Olympic races or baking good cakes, or being conscientious doctors, they cross over and become good immigrants, editor Nikesh Shukla has compiled a collection of essays that are poignant, challenging, angry, humorous, heartbreaking, polemic, weary and - most importantly - real.
Show moreShow less

"The Good Immigrant is a lively and vital intervention into the British cultural conversation around race. Instead of statistics and dogma we find real human experience and impassioned argument - and it's funny and moving, too. A must read!" -- Zadie Smith "The stories are sometimes funny, sometimes brutal, always honest ... if I could, I'd push a copy of this through the letter box of every front door in Britain." * Independent * "Highly recommended ... It's precisely those who might at first think this book is not about us, who should read it" * Spectator * "Perceptive, touching and funny" * Observer * "An important, timely read." -- J. K. Rowling

Award-winning writer Nikesh Shukla gathers twenty British Black, Asian and Minority Ethnic writers and artists to reflect on race, immigration and being 'other' in Great Britain.
Nikesh Shukla is a writer whose debut novel Coconut Unlimited (Quartet Books) was shortlisted for the Costa First Novel Award 2010 and longlisted for the Desmond Elliott Prize 2011. In 2011 he co-wrote with Kieran Yates an essay about the London riots, Generation Vexed: What the Riots Don't Tell Us About Our Nation's Youth (Random House). In 2013 he released The Time Machine (Galley Beggars Press), a novella about food which won Best Novella at the Sabotage Awards. His second novel, Meatspace, was published by The Friday Project, his short stories have featured in numerous anthologies and magazines, and he has previously been writer in residence for BBC Asian Network and Royal Festival Hall. In 2014 he co-wrote Two Dosas, an award-winning short film starring Himesh Patel. His Channel 4 Comedy Lab Kabadasses aired on E4 and Channel 4 in 2011 and starred Shazad Latif, Jack Doolan and Josie Long. He currently hosts The Subaltern podcast, an anti-panel discussion featuring conversations with writers about writing. Guests have included Zadie Smith, Junot Diaz, Teju Cole, James Salter, George Saunders, Jennifer Egan, Evie Wyld, Sam Bain, Alex Preston, Colson Whitehead and more. He also co-hosts a podcast with sci-fi writer James Smythe, Meat Up, Hulk Out.
Show moreShow less
Ienākt Jauns profils