Healing All Creation: Genesis, the Gospel of Mark, and the Story of the Universe [Hardback] 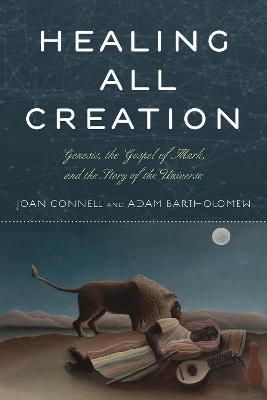 Palielināt
Citas grāmatas par šo tēmu:
Permanent link: https://www.kriso.lv/db/9781538120972.html
Keywords:
In Healing All Creation, a scripture scholar and a religion journalist explore the literary and theological symmetries of Genesis, the Gospel of Mark and the unfolding story of evolution, as told by science and the emerging discipline of cosmological theology. Read together, these narratives shed new light on the Judeo-Christian tradition and pose fresh ideas about how to respond to the moral and environmental crises of our times. Scientific discoveries make it increasingly clear that everything in the world is connected. Physically and spiritually, small actions can have great impact: In the creation myths of Genesis, it is possible for individuals to generate great evil, but also do enormous good and repair a broken world. Mark's story of the public life of Jesus speaks to the transformative effect of cumulative acts of compassion. Cosmological theology suggests that evolution is spiritual as well as material, and that our search for meaning is dynamic, ongoing and grounded in the sanctity of all creation. This book speaks to those for whom Judeo-Christian scripture is important, but also to those who consider themselves spiritual but not religious: those who stand in awe of the majesty of the universe and appreciate the sanctity of all creation. It introduces to a general audience a century-long dialogue among scientists, theologians, scripture scholars and summons the voices of 20th century spiritual heroes, contemporary theologians and religion scholars from a variety of traditions and perspectives. This accessible but scholarly narrative and robust endnotes make it valuable as a textbook for college-level courses on religion and ecology. The authors offer fresh insights into Mark's story of the healing ministry of Jesus and his relationships with women, including his crushing final encounter with the women who stayed with him to the end and the transformative mission it inspired. It raises questions about the gender inequity that persists in organized religion and in the world at large. This book examines institutional Christianity's historical failures, from the early abandonment of nonviolence and its tendency to question the validity of scientific discoveries. It explores the impact of dispensational theology, whose vision of a material world ending in fiery apocalypse produced Christians so focused on the end-times that they have scant regard for the sanctity of the Earth. It has been said that the Bible is the most-purchased and least-read book in America. This accessible narrative introduces a diverse general audience to the riches of contemporary scripture scholarship, the wisdom of cosmological theology and a renewed awareness of the sanctity of all creation.
Show moreShow less

Taking a "cosmological" and inclusive view of Christian scripture, Connell, journalism and media ethics professor at Western Washington University, and Bartholomew, New Testament professor at Gonzaga University, offer an insightful reinterpretation of Genesis and the gospel of Mark, one that elevates the duty to preserve nature and promote nonviolence. The authors contend that Mark's gospel makes repeated allusions (which his original audience would have recognized) to the Genesis account of Adam and Eve's banishment from Eden to focus readers on the importance of free will. They then argue that Jesus in Mark should be viewed as a model for how to use God's gift of free will to resist the temptation toward violent behavior and instead engage in compassionate, nonviolent acts. Incorporating insights from scientists including Edward Lorenz and Stephen Jay Gould-whose theories of "the butterfly effect" and "the great asymmetry" reinforce the authors' points about the interconnected nature of all things-and theologians such as Dorothy Day, Pierre Teilhard de Chardin, and Abraham Heschel, Bartholomew and Connell argue that each "personal decision to promote healing and reconciliation" can have significant positive impact for the universe. This powerful argument that scriptural stories and modern science can work together to redress the crises facing the planet will provide readers of any faith a radical vision of hope for the future. * Publishers Weekly * Cosmological theology (also known as ecotheology) investigates the effect of theology on environmental and social systems. By tying the biblical creation stories in Genesis and the Gospel of Mark, Connell (media ethics, Western Washington Univ.) and Bartholomew (New Testament, Gonzaga Univ.) reveal that a major theme of Jesus's ministry is the repair of the world. The authors first point out that the story of the Fall is not simply about individuals but a disruption of cosmic proportions. They then connect this idea to Mark's version of Jesus in the wilderness. Two of the elements (the temptation and the wild animals) are present in Genesis, and a third (ministering angels) is mentioned in the Talmud. Other stories in Mark are brought in to show Jesus's relationship to nature (e.g., the stilling of the storm) and social systems (e.g., the place of women). These are illustrated by exemplars such as French philosopher Pierre Teilhard de Chardin and American journalist Dorothy Day. * CHOICE * This profound and challenging book radically reframes our understanding of the book of Genesis and the Gospel of Mark. Beautifully written, it offers a vision of a future where acts of compassion can transform a bruised and broken world. In its deeply researched retelling, the authors also make the case that misogyny was mistakenly woven into scriptures over the years, uncovering the radical message of gender equality that inspired the early Christian church. -- Celia Viggo Wexler, author of Catholic Women Confront Their Church: Stories of Hurt and Hope Rethinking scripture must happen if we are to turn around our planetary and interpersonal failings. This highly informed yet accessible book helps both the scholar and layperson get there. -- Ira Rifkin, author of Spiritual Perspectives on Globalization: Making Sense of Economic and Cultural Upheaval Healing All Creation is a valuable contribution to the growing literature in cosmological theology. As the authors demonstrate, the context of an evolutionary story changes the nature of Biblical stories in new and creative ways. -- Mary Evelyn Tucker, Yale Forum on Religion and Ecology Healing All Creation rereads the creation myths of Genesis and Mark's account of Jesus's healing ministry in light of the new cosmology of Pierre Teilhard de Chardin, Thomas Berry, and others and in the face of our planet's pending environmental disaster and humanity's calling to tend and care for all creation. In doing so, this accessible and transformative book reminds us of the power of stories to ground and fuel a cosmology enabling believers to see and heal the world that is their neighbor and vocation. -- Patrick McCormick, Gonzaga University Connell and Bartholomew rightly recognize that Jesus' inauguration of the Kingdom of God encompassed the restoration of all creation-fostering the harmony of nature, the end of domination, and the reversal of violence. Their reflections on the Gospel of Mark, on the leading figures of the last century who championed these issues, and on the current scientific work about the evolutionary emergence of compassion all make for informative and inspirational reading. I commend it to all who want to see hope for healing in our common human journey. -- David M. Rhoads, Lutheran School of Theology at Chicago

Show moreShow less
Adam Bartholomew is a scripture scholar and Protestant clergyman with an ecumenical perspective and a particular interest in biblical storytelling traditions. He is cofounder of the Network of Biblical Storytellers International, a group of scholars engaged in examining and performing the oral traditions on which the New Testament is based. He received a doctorate in New Testament at Union Theological Seminary and pursued New Testament studies under Rudolf Schnackenburg at the University of Wuerzberg. He spent 30 years as an ordained minister of the United Church of Christ, serving congregations in Pennsylvania and teaching at Lancaster Seminary and other schools. In 2001, he became an Episcopal priest, serving congregations in Ohio and New York. He currently teaches New Testament studies at Gonzaga University in Spokane, Washington. Joan Connell is an award-winning writer and editor with longstanding interest in religion, ethics and moral issues. She was a Pulitzer Prize finalist for innovative religion and ethics coverage at Newhouse News Service and later served as editor of Religion News Service, both in Washington, D.C. She was an executive producer at MSNBC.com and senior editor at MSN.com, both in Redmond, Washington. At The Nation in New York City, she was the magazine's online editor. At Columbia University School of Journalism, she was associate director of the Dart Center for Journalism and Trauma. She currently is an editorial consultant and teaches narrative journalism and media ethics at Western Washington University in Bellingham, Washington.
Show moreShow less
Ienākt Jauns profils