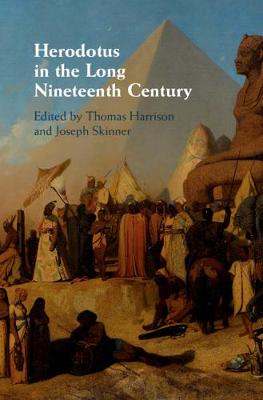 Palielināt
Citas grāmatas par šo tēmu:
Permanent link: https://www.kriso.lv/db/9781108472753.html
Keywords:
Herodotus in the Long Nineteenth Century traces the impact of Herodotus' Histories during a momentous period in world history - an era of heightened social mobility, religious controversy, scientific discovery and colonial expansion. Contributions by an international team of specialists in Greek historiography, classical archaeology, receptions, and nineteenth-century intellectual history shed new light on how the Histories were read, remembered, and re-imagined in historical writing and in an exciting array of real-world contexts: from the classrooms of English public schools and universities to the music hall, museum, or gallery; from the news-stand to the nursery; and from the banks of the Nile to the mountains of the Hindu Kush. They reveal not only how engagement with Herodotus' work permeated nationalist discourses of the period, but also the extent to which these national and disciplinary contexts helped shape the way both Herodotus and the ancient past have been understood and interpreted.
Show moreShow less

Explores the many different ways in which Herodotus' Histories were read and understood during a momentous period of world history.
Introduction Thomas Harrison and Joseph Skinner;
1. From ethnography to history: Herodotean and Thucydidean traditions in the development of Greek historiography Tim Rood;
2. 'Romantic poet-sage of history': Herodotus and his Arion in the long nineteenth century Edith Hall;
3. Herodotus as anti-classical toolbox Suzanne Marchand;
4. George Grote and the 'open-hearted Herodotus' Mark Molesky;
5. Imagining empire through Herodotus Joseph Skinner;
6. Two Victorian Egypts of Herodotus David Gange;
7. Of Europe Phiroze Vasunia;
8. From Scythian ethnography to Aryan christianity: Herodotean revolutions on the eve of the Russian Revolution Caspar Meyer;
9. Herodotus and the 1919-22 Greco-Turkish War Naoise Mac Sweeney;
10. Herodotus's travels in Britain and beyond: prose composition and pseudo-ethnography Thomas Harrison.
Thomas Harrison is Professor of Ancient History at the University of St Andrews, Scotland and a specialist in classical Greek historiography and cultural history. His publications include Divinity and History: The Religion of Herodotus (2000), The Emptiness of Asia: Aeschylus' Persians and the History of the Fifth Century (2000), and Writing Ancient Persia (2011), and (as co-editor, with Bruce Gibson) Polybius and his World: Essays in Memory of F. W. Walbank (2013) and (with Elizabeth Irwin) Interpreting Herodotus (2018). He is currently working on a study of the role of belief in Greek religion. Joseph Skinner is Lecturer in Ancient Greek History at Newcastle University. His research interests include the history and reception of ancient ethnographic thought, Herodotus' Histories and ancient Greek identity. His publications include The Invention of Greek Ethnography: From Homer to Herodotus (2012), and (as co-editor, with Eran Almagor) Ancient Ethnography: New Approaches (2013). He is currently working on his next monograph, Neglected Ethnographies: The Visual and Material (forthcoming).
Show moreShow less
Ienākt Jauns profils