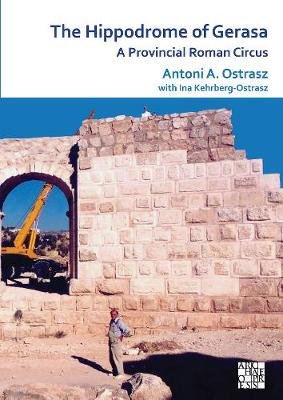 Palielināt
Citas grāmatas par šo tēmu:
Permanent link: https://www.kriso.lv/db/9781784918132.html
The Hippodrome of Gerasa: A Provincial Roman Circus publishes the unique draft manuscript by the late architect and restorer Antoni Ostrasz, the study of Roman circuses and the complex fieldwork for the restoration of the Jarash Hippodrome, a work in progress abruptly ended both in writing and in the field by his untimely death in October 1996. The manuscript is presented as it is in order to retain the authenticity of his work. It is, therefore, an unusual publication providing the researcher as well as restorer of ancient monuments with unparalleled insights of architectural studies for anastyloses. Compendia A and B have been added to supplement the incomplete segments of the manuscript with regard to his studies as well as archaeological data. This concerns the excavation and preparation for the restorations and the archaeological history or stratigraphic history of the site from the foundations to primary use as a circus to subsequent occupancies of the circus complex. The study of the architectural and archaeological remains at the hippodrome encapsulates the sequence of the urban history of the town from its early beginnings to Roman Gerasa and Byzantine and Islamic Jarash, including vestiges of the seventh century plague and still visible earthquake destructions, as well as Ottoman settlements.
Show moreShow less
List of Figures ; Foreword and acknowledgements ; The Hippodrome of Gerasa. A Provincial Roman Circus - Antoni A. Ostrasz (1929-1996) ; Introduction ;
Chapter I: History of exploration, excavation and research ;
Chapter II: The Excavation 1985-1996 ;
Chapter III: The Architecture of the Hippodrome ; [
Chapter IV-V unwritten at time of author's death] ;
Chapter VI: History of the building ;
Chapter VII: The Hippodrome of Gerasa and Roman circuses ; Bibliography and Abbreviations ; Compendium A: Published articles and unpublished reports by Antoni A. Ostrasz 1983 to 1995 ; Published articles ; The Hippodrome of Gerasa: A report on excavations and research 1982-1987 ; Jerash - The Hippodrome ; The Excavation and Restoration of the Hippodrome at Jerash.: A synopsis ; Gerasa. Hippodrome Report ; Jerash/Gerasa: Hippodrome. Report on the anastylosis of the E-S tower ; The Hippodrome of Gerasa: A case of the dichotomy of art and building technology ; Unublished articles ; Figures 1-145. The original manuscript and Compendium A ; Compendium B: The Hippoodrome of Gerasa. Archaeological materials and their contexts ; Published Articles ; ANCIENT BURIALS AT THE HIPPODROME OF GERASA / JARASH ; A History of Occupational Changes at the Site of the Hippodrome of Gerasa ; Published articles by Ina Kehrberg[ -Ostrasz] ; Selected Lamps and Pottery from the Hippodrome at Jerash ; Flaked Glass and Pottery Sherd Tools of the Late Roman and Byzantine Periods ; Sherd Tools and their Association with Workshops at the Gerasa Hippodrome ; Ceramic Lamp Production in the 4th and 5th Centuries AD ; Late Hellenistic and Early Roman Pottery of Gerasa ; Gerasa as Provider for Roman Frontier Stations ; Figurative adornment of Roman circuses: virtual presentation of the starting gate herms ; Byzantine ceramic productions ; The complexity of lamps ; Pp. 411-430 in SHAJ 12, 2016 figs 1-10 (Figures 195-205) ; Pottery and lamps from the foundation trenches and wall constructions ; Figures 146-261. Compendium B ; Bibliography and Abbreviations
Antoni Adam Ostrasz M.Eng PhD (Warsaw 1958, 1967) began his overseas work as research architect with the Polish Archaeological Centre in Cairo from 1961-1966 before joining expeditions to Alexandria, Palmyra and Nea Paphos. He was commissioned by the Syrian Authorities at Palmyra to prepare the restorations of several monuments, recently destroyed. He continued his architectural studies at Fustat and later joined the 'Jarash Archaeological Project' where he studied and restored the Umayyad House and the Church of Bishop Marianos. In 1984, the Dept of Antiquities appointed him as permanent director for the restoration project of the Hippodrome at Jarash. ; Ina Kehrberg-Ostrasz graduated in Classical and Near Eastern Archaeology at the University of Sydney where she completed her postgraduate thesis on Cypriot ceramics. She began excavating in Jordan with the University of Sydney in 1975, followed by several international and long-term archaeological projects at Jarash and other Decapolis cities in Jordan. She became Hon. Research Fellow at the University of Sydney, and was made Hon. Lecturer at ANU/Canberra in 2019 where she offers Masterclasses in the study of ceramics and other artefacts.
Show moreShow less
Ienākt Jauns profils