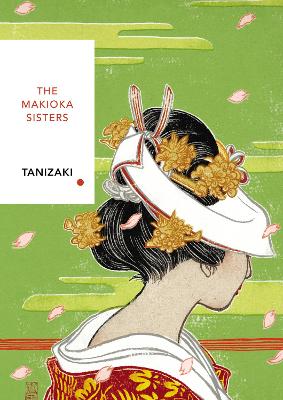 Palielināt
Citas grāmatas par šo tēmu:
Permanent link: https://www.kriso.lv/db/9781784875435.html
Keywords:
'An exquisite novel about four sisters living though a turbulent decade...I'd put it in the 10 greatest books of the 20th century' David Mitchell 'A near-perfect novel' Hanya Yanagihara In the years leading up to the Second World War, four sisters live in dilapidated houses in Osaka and Ashiya, and each navigate their own complex, personal relationship to the fading lustre of the Makioka family name. Rich with breathtaking descriptions of ancient customs and an ever-changing natural world, Junichiro Tanizaki evokes in loving detail a long-lost way of life even as it withers under the harsh glare of modernity. TRANSLATED BY EDWARD SEIDENSTICKER Part of the VINTAGE JAPANESE CLASSICS - five masterpieces of Japanese fiction in gorgeous new gift editions.
Show moreShow less

A subtle, moving novel * The Times * A complex, detailed and agreeably gossipy book...The author's obvious nostalgia for this vanished world does not prevent him from looking objectively at its darker side and this, together with his artful blend of the exotic and the mundane, creates an absorbing and richly textured story * Sunday Times * One of the books I return to frequently is Junichiro Tanizaki's The Makioka Sisters: a near-perfect novel -- Hanya Yanagihara An exquisite novel about four sisters living though a turbulent decade, during the Forties and Fifties, I'd put it in the 10 greatest books of the 20th century -- David Mitchell Exquisite craftsmanship * Guardian *

VINTAGE JAPANESE CLASSICS - following on from the success of Vintage Russian Classics and European Classics, these are covetable new editions of the best Japanese writers on the Vintage list
Junichiro Tanizaki was one of Japan's greatest twentienth century novelists. Born in 1886 in Tokyo, his first published work - a one-act play - appeared in 1910 in a literary magazine he helped to found. Tanizaki lived in the cosmopolitan Tokyo area until the earthquake of 1923, when he moved to the Kyoto-Osaka region and became absorbed in Japan's past. All his most important works were written after 1923, among them Some Prefer Nettles (1929), The Secret History of the Lord of Musashi (1935), several modern versions of The Tale of Genji (1941, 1954 and 1965), The Makioka Sisters, The Key (1956) and Diary of a Mad Old Man (1961). He was awarded an Imperial Award for Cultural Merit in 1949 and in 1965 he was elected an honorary member of the American Academy and the National Institute of Arts and Letters, the first Japanese writer to receive this honour. Tanizaki died later that same year.
Show moreShow less
Ienākt Jauns profils