Mycenaean Greece and the Aegean World: Palace and Province in the Late Bronze Age [Mīkstie vāki] 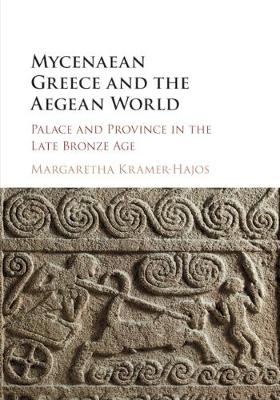 Palielināt
Citas grāmatas par šo tēmu:
Permanent link: https://www.kriso.lv/db/9781107514836.html
Keywords:
In this book, Kramer-Hajos examines the Euboean Gulf region in Central Greece to explain its flourishing during the post-palatial period. Providing a social and political history of the region in the Late Bronze Age, she focuses on the interactions between this 'provincial' coastal area and the core areas where the Mycenaean palaces were located. Drawing on network and agency theory, two current and highly effective methodologies in prehistoric Mediterranean archaeology, Kramer-Hajos argues that the Euboean Gulf region thrived when it was part of a decentralized coastal and maritime network, and declined when it was incorporated in a highly centralized mainland-looking network. Her research and analysis contributes new insights to our understanding of the mechanics and complexity of the Bronze Age Aegean collapse.
Show moreShow less

Kramer-Hajos examines the Euboean Gulf region in Central Greece to explain its flourishing during the post-palatial period.
1. Introduction to the region and theoretical approaches;
2. The ethos of the sword - the creation of early Mycenaean elite culture;
3. The role of elite networks in the Mycenaeanization of the provinces;
4. Seals and swords and changing ideologies; 5: Prehistoric politics - the creation of the periphery;
6. Palatial concerns - ships and exotica;
7. Reactions to collapse - the rise of a sailor-warrior culture;
8. Modeling collapse and revival;
9. Conclusions.
Margaretha Kramer-Hajos has taught at the University of Michigan and at Indiana University. She is the recipient of an Award for Excellence in College Teaching from the Classical Association of the Middle West and South. Her articles have appeared in Hesperia, the Journal of Hellenic Studies, and Kadmos; and a monograph was published with British Archaeological Reports in 2008. Her research focuses on Mycenaean Central Greece.
Show moreShow less
Ienākt Jauns profils