Normandy '44: D-Day and the Battle for France [Hardback] 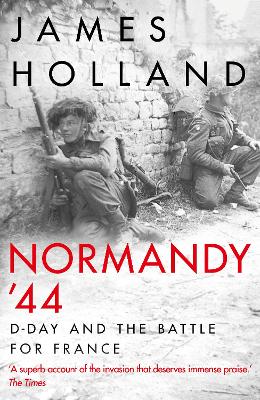 Palielināt
Citas grāmatas par šo tēmu:
Permanent link: https://www.kriso.lv/db/9781787631274.html
Keywords:
'HISTORY BOOK OF THE YEAR' The perfect gift for Christmas: mission accomplished. 'A superb account of the invasion that deserves immense praise. To convey the human drama of Normandy requires great knowledge and sensitivity. Holland has both in spades' The Times Renowned World War Two historian James Holland presents an entirely new perspective on one of the most important moments in recent history, unflinchingly examining the brutality and violence that characterised the campaign. ______________ D-Day and the 76 days of bitter fighting in Normandy that followed have come to be seen as a defining episode in the Second World War. Its story has been endlessly retold, and yet it remains a narrative burdened by both myth and assumed knowledge. In this reexamined history, James Holland presents a broader overview, one that challenges much of what we think we know about D-Day and the Normandy campaign. The sheer size and scale of the Allies' war machine ultimately dominates the strategic, operational and tactical limitations of the German forces. This was a brutal campaign. In terms of daily casualties, the numbers were worse than for any one battle during the First World War. 'A devastating new account..Holland knows his stuff when it comes to military matters. The reader is in safe hands navigating each aspect of this complex campaign' Daily Mail, Book of the Week _________________ *Drawing on unseen archives and testimonies from around the world *Introducing a cast of eye-witnesses that includes foot soldiers, tank men, fighter pilots and bomber crews, sailors, civilians, resistance fighters and those directing the action *An epic telling that will profoundly recalibrate our understanding of its true place in the tide of human history
Show moreShow less

An impressive new account of D-Day ... Holland knows his stuff when it comes to military matters ... he reads the minds of the generals, their tactics, their blunders - on both sides * Daily Mail * A readable account of one of the 20th century's most defining battles provides a strategic overview enlivened by personal accounts of the horror ... for the general reader there are plenty of surprises * The i * An invigorating new history of the Allied invasion of France * Strong Words Magazine * A superb account of the invasions that deserves immense praise...To convey the human drama of Normandy requires great knowledge and sensitivity. Holland has both in spades * The Times * As an account of this mighty and vitally significant clash of armies, Normandy '44 stands as richly impressive, hard to surpass * William Boyd, TImes Literary Supplement *

Coinciding with the 75th Anniversary of D-Day, James Holland draws on unseen archives and testimonies from around the world to offer a new perspective on this historic time.
James Holland is an internationally acclaimed and award-winning historian, writer, and broadcaster. The author of a number of best-selling histories including Fortress Malta: An Island Under Siege, Battle of Britain, Dam Busters, and most recently, The War in the West and Big Week, he has also written nine works of historical fiction, including the Jack Tanner novels. He has presented - and written - a large number of television programmes and series, including the film Normandy 44 for the BBC, and is a mainstay of the internationally successful Nazi Megastrucutres. He has scripted and is producing a feature film of his novel, A Pair of Silver Wings. He is also Chair of the Chalke Valley History Festival, a Fellow of the Royal Historical Society, and a Research Fellow at Swansea University. He can be found on Twitter as @James1940.
Show moreShow less
Ienākt Jauns profils