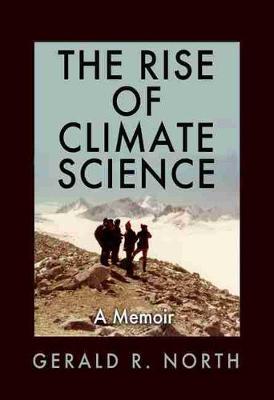 In a career spanning four decades, Gerald R. North contributed groundbreaking research that continues to shape the modern field of climate science. However, the route he has taken was full of surprising twists and turns that included hate mail, eavesdropping by the KGB, and sometimes acrimonious debate with climate-change deniers.

North&;s significant contributions to the field include his innovative &;toy model&; analysis of climate change based on ingeniously simplified models and his lead proposal for and successful approval of the Tropical Rainfall Measuring Mission (TRMM) satellite. Launched in 1997, the TRMM&;s purpose was to collect data on the global climate system. The TRMM operated successfully for 17 years before it was deactivated in 2015.

In The Rise of Climate Science, North recounts in detail his life in the vanguard of modern climate science. He offers an insider look at the academic research and government initiatives around global warming and what that means for the planet. He includes stories of conversations with top Soviet climate scientists at the height of the Cold War in the late 1970s&;complete with clandestine electronic surveillance. He also describes the experience of testifying before Congress and engaging in public exchanges with those who doubted the reality of the phenomenon his research field described.

Climatology today has advanced into a mature phase. This book is an important contribution to understanding its development in the twentieth century and adds a distinctly human face and sensibility to the ongoing societal conversation around climate change and its implications for our future.